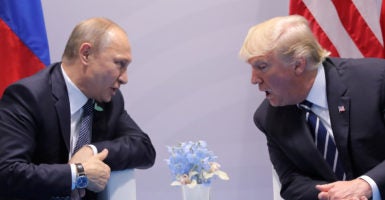 On Friday, in his meeting with the Group of Seven countries, President Donald Trump proposed that Russia be able to rejoin the G-7.

Russian President Vladimir Putin would need to do much to re-qualify for that privilege, since Russia still retains its hold on Crimea and maintains troops in eastern Ukraine. After all, these are the very reasons Russia was originally ousted from the group in March 2014.

The G-7 comprises seven of the world’s advanced industrialized economies. They are also all democracies. These same countries happen to be America’s close allies, too—Canada, France, Germany, Italy, Japan, and the United Kingdom. The group meets annually to discuss issues such as shared global security and economic matters.

Over four years ago, Russia actually was part of the group, which then was known as the G-8. Russia first joined the G-8 in 1997 when Boris Yeltsin was still in power. Back then, Western relations with Russia looked promising, so it made perfect sense for the eight countries to align.

However, when Russia decided in March 2014 to illegally annex Crimea and invade the Donbas region of Ukraine, it proved it was no longer a trustworthy actor on the international stage. Thus, the G-8 removed Moscow and reverted back to the G-7.

On Friday, Trump suggested that Russia should be readmitted into the group. But before this can happen, at a minimum Russia must do the following:

In May 2018, Russia was found responsible for the tragedy but Putin denies it. In addition to owning up, Russia must formally apologize to and suitably compensate the families of those who lost loved ones in the incident.

The G-7 is an organization that allows like-minded democracies to work together to tackle many of the world’s major problems. Putin has not demonstrated that he can be a trusted partner, and Trump is wrong to say that Russia should now be allowed back in the club.

However, if Russia changes its ways, it should be invited back into the G-7. Russia is a proud country. For better or for worse, it possesses a history of being at the center of global affairs. But it can only re-enter the G-7 once it demonstrates that it is a responsible and collegiate actor on the international stage.