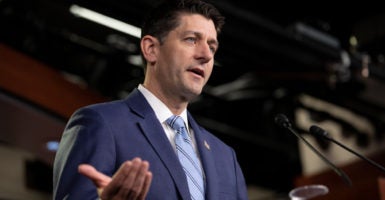 The House of Representatives voted 210-206 Thursday night to claw back $15 billion in appropriated spending, making good on the lead of President Donald Trump, who submitted the rescission request last month.

“The administration applauds today’s passage of H.R. 3, the Spending Cuts to Expired and Unnecessary Programs Act, in the U.S. House of Representatives and urges the Senate to quickly act on the legislation,” White House press secretary Sarah Huckabee Sanders said in a statement released after the House vote Thursday night.

The measure cancels expired funding from the Children’s Health Insurance Program, or CHIP, among other federal programs and will have a “$1 billion or so impact on the government’s budget deficit,” the Associated Press reported.

It also includes over $4 billion in cuts to a loan program for boosting fuel-efficient, advanced-technology vehicles.

Lawmakers who voted for the package said it was a significant step toward fiscal responsibility.

I voted tonight on a $15B rescissions package, a bill that “de-obligates” unused funds from of a variety of programs. This is a fiscally responsible step forward in how we govern, and I look forward to more progress in addressing our burgeoning debt in the coming months.

.@RepMarkWalker on the passage of the largest rescissions package in history: pic.twitter.com/XiCCFSdtZd

Justin Bogie, a senior policy analyst in fiscal affairs at The Heritage Foundation, told The Daily Signal in an email that the House passing the rescissions package “is a first step towards returning to fiscal sanity.”

“It is not the long-term solution to the nation’s growing debt problem, but is a powerful tool towards reining in wasteful spending,” Bogie added.

Senate Majority Leader Mitch McConnell, R-Ky., has reportedly been open to the Senate passing a recission package, which can be passed in the Senate by a simple majority vote.

“If the House is able to pass the rescissions package, we’ll take a look at it,” McConnell said May 8.

Congress has not used rescissions to cut planned spending in about 20 years, but every president from Gerald Ford to Bill Clinton used the process successfully, according to the White House.

To begin the rescission process, a president must send a request or requests to Congress. Once he does so, the lawmakers have 45 in-session days to act.

“Congress should … work with the president on subsequent packages targeting spending increases included in the latest budget deal,” Bogie said.