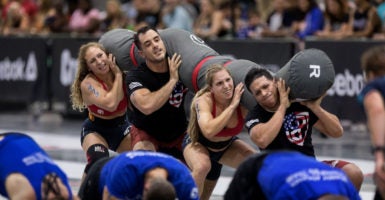 “As someone who personally believes celebrating ‘pride’ is a sin, I’d like to personally encourage #CrossFitInfiltrate for standing by their convictions and refusing to host an @indypride workout,” Russell Berger reportedly wrote on Twitter. (Photo: Greg Lovett/ZUMA Press/Newscom)

Russell Berger, the chief knowledge officer for the fitness movement and company known as CrossFit, was fired Wednesday for saying that LGBTQ pride and celebrations of such are a “sin.”

His criticism came after showing support for a CrossFit facility in Indianapolis, which canceled a workout session that was intended to support Pride Month, according to BuzzFeed News.

“We believe that true health forever can only be found within humility, not pride,” the CrossFit gym said in an email to members, reports CBS4. “Humility is seeing oneself as they truly are, and as God truly defines them to be. As a business we will choose to deploy our resources towards those efforts and causes that line up with our own values and beliefs.”

“As someone who personally believes celebrating ‘pride’ is a sin, I’d like to personally encourage #CrossFitInfiltrate for standing by their convictions and refusing to host an @indypride workout,” Berger reportedly wrote on Twitter. “The intolerance of the LGBTQ ideology toward any alternative views is mind-blowing,” he continued, ostensibly conveying intolerance.

Several members, coaches, and other staff quit as a result of that particular CrossFit’s decision to cancel the themed workout event.

CrossFit originally placed Berger, an orthodox Christian and pastor at a local church in Alabama, on unpaid leave, and soon after fired him.

“CrossFit is a diverse community in every way, and that’s what makes us strong,” the workout company said. “No matter who you are, how you’re built, what you believe, or who or how you love—we are proud of you.”

The statements made today by Russell Berger do not reflect the views of CrossFit Inc. For this reason, his employment with CrossFit has been terminated.

Berger, who also served as a spokesman, may have saw his termination as a surprise since he said in prior tweets that he appreciates working for a company “that tolerates disagreement,” according to BuzzFeed News.

“I have homosexual coworkers who I love and respect, and as far as I am aware, they aren’t demanding I be punished for my views,” he continued.

Berger may also be surprised since he said such criticism isn’t very different than what’s been expressed on his social media accounts before.

Within those public pieces of communication, Berger described the “tactics of some in the LGBTQ movement toward dissent” as “an existential threat to freedom of expression.”

Those tweets have since been deleted.

“He needs to take a big dose of ‘shut the f— up’ and hide out for awhile,” CrossFit founder and CEO Greg Glassman told BuzzFeed News. “It’s sad.”

“I have no qualms with the gym owner expressing his personal convictions, I have no qualms with customers and coaches leaving because they have different convictions,” Berger said, reports BuzzFeed News. “But I did have qualms with the massive response from people who had no direct business relationship with the affiliate, but just engaged in social media—organized public destruction of his business’ reputation and forced him to shut his doors. I think that’s an expression of pure intolerance, not being able to disagree with someone and engage in meaningful discourse.”

Editor’s note: A sentence characterizing Berger’s views on what happened has been removed, and the article has been additionally clarified on Berger’s religious beliefs. Here is Berger’s full statement:

Until my termination … I was CrossFit’s Chief Knowledge Officer. My comments where imprudent, and I drug my company in a difficult position, which I deeply regret, especially considering I was not directly asked to weigh in on the subject that inspired my comments. I am particularly saddened for my employer and coworkers, who do incredible and life-changing work for millions of people, and are now forced to respond with their time and resources to this ordeal.

That being said, my beliefs and intentions have been misrepresented, both intentionally and unintentionally. As a Christian, I believe everyone, myself included, is guilty of breaking our moral obligations to God and deserves punishment. But by turning from our sin and trusting fully in Jesus Christ, we can be forgiven and reconciled to our creator. I love those who the LGBTQ community represents, and want them to know Christ, and reveling in sin is a heartbreaking obstacle to that. I use the word ‘sin’ to describe pride events, and the sexual lifestyles associated with them, because that’s what God’s Word calls it, and I believe that God’s Word is true. The same theology that leads me to this view leads me to the knowledge that all humans are created in God’s image, and are therefore inherently valuable and deserve to hear this offer of God’s grace. From the Christian perspective, the most hateful thing I could do for someone would be to lie to him or her about sin and our need for Christ, as unpopular as this may be in our culture today. While I regret my imprudence and the harm it may have caused my company, I stand behind these convictions.