Calm Down, Media. The First Lady Is ‘Back.’ 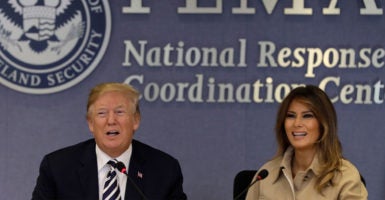 First lady Melania Trump made her first public appearance Wednesday since undergoing kidney surgery May 14, but from the media coverage you would have thought she’s been missing for a year.

Melania had appeared at a private White House reception for Gold Star families the night before. However, that event was closed to the press.

On Wednesday, the first lady joined President Donald Trump and the majority of his Cabinet for a briefing at the Federal Emergency Management Agency in preparation for the 2018 hurricane season.

“The people of our country love you,” the president said to his wife. “Thank you, honey.”

Melania’s appearance at the briefing brings to a close a 26-day period of ridiculous, over-the-top media coverage targeting her “disappearance.” Finally.

Coverage veered from the absurd (she’s hiding in New York) to the ridiculous (she has a body double) to the maliciously irresponsible (lies that she suffers spousal abuse).

The president addressed the media’s hysterics and defended the first lady in a series of tweets hours before the meeting with FEMA officials:

The Fake News Media has been so unfair, and vicious, to my wife and our great First Lady, Melania. During her recovery from surgery they reported everything from near death, to facelift, to left the W.H. (and me) for N.Y. or Virginia, to abuse. All Fake, she is doing really well!

…Four reporters spotted Melania in the White House last week walking merrily along to a meeting. They never reported the sighting because it would hurt the sick narrative that she was living in a different part of the world, was really ill, or whatever. Fake News is really bad!

At least one reporter, CNBC’s Eamon Javers, did report a “Melania sighting” last week. And he did so with the telling acknowledgement: “Not that this will deter the conspiracy theorists … ”

Not that this will deter the conspiracy theorists, but I saw the First Lady walking with her aides in the West Wing yesterday afternoon. https://t.co/N9xadq7P0d

It’s unclear whether Javers is one of the four reporters mentioned in the president’s tweet, but the sentiment remains the same.

Melania clapped back against the persistent rumor mill last week in her own tweet, which only sparked more conspiracy theories.

I see the media is working overtime speculating where I am & what I'm doing. Rest assured, I'm here at the @WhiteHouse w my family, feeling great, & working hard on behalf of children & the American people!

Instead of focusing on a thriving economy, record unemployment numbers, or historical progress with North Korea, many in the media chose to participate in a fiasco of “Where’s Melania?!”

If any First Lady "disappeared," you'd "want to know where she is." Here's our @CNN discussion: https://t.co/qCLndJKRMp pic.twitter.com/eJ5KY0xTzu

For a first lady who is said to be extremely independent, private, and confident, this withdrawal from public duties while she takes time to recover should be anything but surprising.

After having major surgery, why would she not play by her own rules and determine her own timing?

What’s so interesting about this is how much journalists hate Melania Trump. Imagine hating Melania Trump. Whatever else she is, Melania Trump is not an overbearing public figure. She’s not lecturing you about your weight, or trying to control your personal life. She doesn’t weigh in on tax rates or global warming.

It’s unlikely she will run for Senate from New York when this is all over. Nobody thinks she’s one of her husband’s key political advisers. You may never have even heard Melania Trump’s voice. Many people haven’t—she doesn’t talk much in public.

“Melania Trump,” Carlson added, “has done absolutely nothing wrong to you, or anyone you know, or anyone you’ll ever meet. She married Donald Trump. That is her only sin in the eyes of the press corps.”

It’s reasonable and natural for people to be curious when a public figure withdraws. But a serious surgery and recovery time for a well-known private person should not translate into a media circus.

It’s discouraging to see a first lady who represents our country so well receive this type of treatment, criticism, and unsubstantiated speculation from the media.