The Racism of Government Family Planning 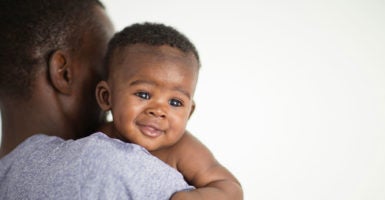 In 1970, 38 percent of black babies were born to unwed mothers. Today it is more than 70 percent. (Photo: Resolution Productions Blend Images/Newscom)

New proposed changes in regulations from the Department of Health and Human Services will close the door on using funds from its Title X family planning program for abortion.

HHS’ Office of Population Affairs, which administers this program, is a poster child for ill-conceived government policy. How is it, in our nation that cherishes the ideals of human freedom and dignity, that we’re funding government bureaucrats to advise low-income citizens—almost a quarter of these “clients” are black—about how many children they should bring into this world and when?

Despite explicit language in the legislation that created the Title X family program in 1970 prohibiting funding “programs in which abortion is a method of family planning,” this directive has been effectively ignored.

HHS reports that 4 million individuals are getting services through this program. However, 1.6 million of them, 40 percent, according to the Guttmacher Institute, are receiving these services at Planned Parenthood clinics.

Given the millions that Planned Parenthood, the nation’s largest abortion provider, spends on lobbying and political contributions, its success in keeping the faucet of federal funding of its activities open comes as no surprise.

But now the Trump administration is stepping up to enforce the law, with the positive additional benefit of protecting human life. You might say that our president understands that building a culture of life is a vital part of making America “great again.”

The new HHS order requires complete financial and physical separation of Title X funds from abortion activity. No Title X funds can be used for abortion. And abortions cannot be performed in any facility in which programs being funded by Title X are taking place.

Although Title X counselors will be prohibited from discussing abortion as a family planning measure, they can discuss it when a woman has already decided it’s what she wants. Then they can provide a list of abortion providers.

But as we think about this, let’s consider the bigger question. What is the federal government doing in the family planning business anyway?

The Office of Population Affairs describes, among the activities of its “Family Planning Mission,” offering guidance “to assist individuals in determining the number and spacing of their children.”

Given that this family planning guidance is targeted to low-income Americans, who happen to be disproportionately black, let’s consider what has happened to the black family since the Office of Population Affairs first began.

The budget of the Title X family planning program in 1971 was $6 million. Today, it is $286 million dollars, an increase of fiftyfold. What have we gotten?

In 1970, 38 percent of black babies were born to unwed mothers. Today it is more than 70 percent.

I would suggest that government “family planning” is really an insidious, pernicious kind of racism. It’s not about improving the quality of life, but rather it is about discouraging black women, and other poor women, from having children and encouraging them to abort their pregnancies.

The collateral damage has been the collapse of the black family.

This important new HHS proposed rule will take care of the abortion issue.

But we need a broader initiative to get rid of the damaging and wasteful government “family planning” business.

The nation would be better served, particularly at a time of trillion-dollar deficits, to return the $286 million spent on Title X programs to taxpayers.

Black women should be getting their “family planning” guidance from their pastor, not from government bureaucrats.