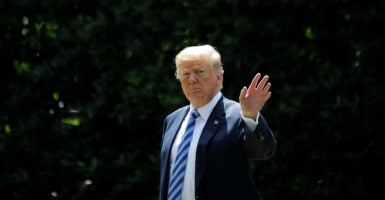 President Donald Trump waves as he walks across the South Lawn before boarding Marine One and departing the White House June 1. (Photo: Chip Somodevilla/SIPA/Newscom)

The personal legal team for President Donald Trump argued in support of broad presidential powers in a letter to special counsel Robert Mueller—and Trump advanced his own legal arguments on Twitter on Monday.

John Dowd, Trump’s former personal lawyer who the president fired in March, and Jay Sekulow, still on the team, wrote the 20-page letter to the special counsel in January, which was first reported by The New York Times on Saturday.

The president on Monday tweeted that he has the authority to pardon himself—but added that he wouldn’t need to, because he hadn’t done anything wrong. He later said the special counsel was unconstitutional.

Here’s a look at what legal and constitutional experts have to say about key questions surrounding the Mueller probe of Trump, Russian meddling in the 2016 presidential campaign, and potential obstruction of justice.

1. Can a President Pardon Himself?

As has been stated by numerous legal scholars, I have the absolute right to PARDON myself, but why would I do that when I have done nothing wrong? In the meantime, the never ending Witch Hunt, led by 13 very Angry and Conflicted Democrats (& others) continues into the mid-terms!

Trump could be correct, said Robert Ray, the last prosecutor to get a plea agreement from an outgoing president, President Bill Clinton in 2001. However, that’s not entirely clear.

“A president’s pardon powers, if not unlimited, are almost absolute,” Ray told The Daily Signal in a phone interview.

The Constitution grants Congress the power to impeach and remove a president if it determined such a self-pardon was beyond the pale, Ray said.

Casting some doubt on self-pardoning, Ray noted the Constitution, in addressing impeachment, says:

Judgement in Cases of Impeachment shall not extend further than to removal from Office, and disqualification to hold and enjoy any Office of honor, Trust or Profit under the United States: but the Party convicted shall nevertheless be liable and subject to Indictment, Trial, Judgement and Punishment, according to Law.

That, Ray said, would likely have to be determined by a court.

“Impeachment is one process, and the justice is another process,” Ray said. “Theoretically, it would be up to a court. A president could pardon himself, but when he leaves office, it might be ineffective.”

A court hasn’t decided on the matter, but a Justice Department memo at the height of the Watergate scandal said a president cannot pardon himself.

The Aug. 5, 1974 memo by Acting Assistant Attorney General Mary Lawton wrote, “Under the fundamental rule that no one may be a judge in his own case, the president cannot pardon himself.”

Ray took over as independent counsel investigating President Bill Clinton when Ken Starr stepped aside. Clinton was impeached by the House in 1998 for perjury and obstruction of justice in connection to the Monica Lewinsky scandal. The Senate subsequently acquitted him.

On Clinton’s last full day in office, he admitted he was dishonest under oath and surrendered his law license for five years.

While the matter hasn’t been tested, the Justice Department’s Watergate-era ruling could be the most firm statement so far, said Richard Roth, a corporate lawyer in New York and frequent legal commentator.

“No American president has ever tested this legal issue. Nor has a court ever ruled on the question of whether such an extreme action is allowed under the U.S. Constitution,” Roth told The Daily Signal. “But, again, when the Justice Department was faced with the possibility that President Richard Nixon might try to pardon himself, a senior attorney at the DOJ took the position that he could not.”

A pardon linked to a particular offense clears a person from all prosecutions for that offense, said Hans von Spakovsky, senior legal fellow for The Heritage Foundation.

“The president’s pardon power in Art. II, Sec. 2, Clause 1 is virtually unlimited,” von Spakovsky told The Daily Signal in an email. “He can issue a pardon to anyone for the violation of any federal laws, although the pardon power does not cover civil or state cases, and a pardon can be given either pre-or-post-conviction.”

“The only other limitation in the Constitution is that the pardon power doesn’t extend to ‘Cases of Impeachment,’” he said. “So, while a president could theoretically issue himself a pardon if he were charged with any criminal offenses, the pardon would not prevent him from being impeached by Congress.”

2. Is the Special Counsel’s Probe Legal?

The appointment of the Special Counsel is totally UNCONSTITUTIONAL! Despite that, we play the game because I, unlike the Democrats, have done nothing wrong!

The appointment of a special counsel itself is entirely constitutional, said Steven Calabresi, a professor at Northwestern University Pritzker School of Law. However, the Mueller investigation has crossed legal boundaries, the professor argued.

In a Wall Street Journal op-ed, Calabresi explained that Mueller isn’t a presidential appointee confirmed by the Senate, which should limit the scope of his investigation.

“Rosenstein made a mistake in appointing Mueller, a private citizen, instead of giving it to one of the 93 U.S. attorneys who were nominated by the president and confirmed by the Senate,” Calabresi told The Daily Signal.

He referenced Morrison v. Olson, the 1988 case that upheld the constitutionality of the independent counsel statute.

The majority opinion, written by Chief Justice William Rehnquist, asserted that under the Constitution’s Appointments Clause, “principal officers” must be appointed by the president with the Senate’s consent. Rehnquist wrote an independent counsel was an “inferior officer,” not subject to the appointment process and has “limited jurisdiction” over “certain federal officials suspected of certain serious federal crimes.”

Calabresi cited the appointment of Patrick Fitzgerald, a U.S. attorney for Illinois, as special prosecutor in 2003 to investigate the leaking of a CIA employee’s name, as a constitutional appointment.

However, Mueller’s probe has targeted people not directly related to alleged collusion between the Trump presidential campaign and Russia, and extended into purported financial crimes by former Trump campaign manager Paul Manafort and other matters as well as 13 Russians and others.

“An inferior officer can investigate one or two people for one or two crimes,” Calabresi said. “Mueller is investigating a lot of people for a lot of crimes. Mueller’s appointment was unconstitutional.

“Everything he has done, every conviction or subpoena can be challenged in court as null and void.”

3. Can a President Be Indicted or Subpoenaed?

Mueller has requested the opportunity to question the president. While Trump has said he is willing to as a means to wrap the investigation up, his lawyers have advised against it.

The Justice Department’s Office of Legal Counsel has issued past opinions stating that a president cannot be indicted because it could both paralyze the government and raise separation of powers questions.

The matter, however, has never been adjudicated, Ray said. He referenced Jones v. Clinton, the 1997 case that determined a sitting president can face civil litigation, as a potential legal argument to counter the Office of Legal Counsel opinion.

Further, it is unclear whether the same principle would extend to a subpoena compelling Trump to testify to a federal grand jury, Ray said.

Starr’s team questioned Clinton in 1998, but the questioning was not in front of a grand jury and came after an agreement to avoid a subpoena.

“A subpoena hasn’t been adjudicated. The subpoena was withdrawn, and he agreed to sit for an interview,” Ray said of the White House questioning that was shown via closed circuit to the federal grand jury.

We are better served if the parties work these matters out rather than tested in the courts. That could imperil all future presidents.

What type of separation of powers issues does that raise? Most responsible people in all three branches of government should be reluctant to travel down that path.

4. Can a President Terminate an Investigation?

The Jan. 29 letter from Dowd and Sekulow to Mueller asserted the president has the right to terminate the investigation as head of the executive branch.

The letter said in part:

A President can also order the termination of an investigation by the Justice Department or FBI at any time and for any reason.

Such an action obviously has an impact on the investigation, but that is simply an effect of the President’s lawful exercise of his constitutional power and cannot constitute obstruction of justice.

Trump critics said this was a parallel to the famous quote from former President Richard Nixon after Watergate, in which he said, “[W]hen the president does it, that means that it is not illegal.” Nixon made the comment after he resigned.

Presidents certainly can obstruct justice, Ray said, but there is no evidence that Trump has done so in a way comparable to Nixon.

“This is not the same as when Nixon said if the president does it, it’s not illegal. If a president, as Nixon did, conspired to pay off witnesses to affect testimony, that would be obstruction of justice,” Ray said. “That is different from firing an FBI director, which the president can do for any reason or no reason.”

This story was updated to include comment from Richard Roth.