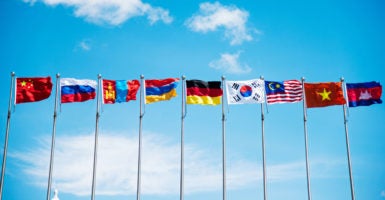 Most nations that signed the Paris climate accords will soon fail to meet their agreement-defined deadlines for fossil fuel reduction. (Photo: baona/Getty Images)

June 1 marks the first anniversary of President Donald Trump’s having begun the process of withdrawing the United States from the Paris climate accord.

Trump justified the withdrawal by calling the situation “the latest example of Washington entering into an agreement that disadvantages the United States to the exclusive benefit of other countries.”

Trump was wrong. The climate accord is not just a bad deal for the U.S., but for all of the developed countries that have committed to higher energy prices for minimal climate benefit.

It’s a bad deal for the developing world if these countries choose to deny their citizens affordable, reliable energy sources. Sure, some of these countries may receive money to build new renewable-energy generation, but mandating a shift away from natural resources that power 80 percent of the world is going to make them worse off.

Despite arguments to the contrary, Trump’s withdrawal from the Paris Agreement is not about prioritizing the economy over the planet. Rather, the administration recognized that the climate accord is a costly non-solution, regardless of one’s position on climate change.

It’s no surprise that many countries are talking the climate talk, but not walking the walk. The true nature of the agreement has been revealed by the contradictory actions of other nations.

The wishful platitudes and ambitious goals of the Paris climate agreement have begun to meet the realities of a complex, energy-dependent world.

The stark reality is that healthier economies mean more energy use, and consequently, rising emissions (though not always).  When economies were in a slump, it was easier to commit to emissions reductions. When countries’ economies began to grow, many saw emissions rise.

In fact, the Berlin-based organization Urgewald projects that 1,600 new coal-fired generating plants under construction or planned will result in 840,000 megawatts of new capacity.

Smaller, less developed countries have not been the only countries that have struggled to meet their emissions goals. Some nations, such as Turkey and Indonesia, have even expanded their use of coal power to satisfy growing energy needs.

Pakistan, in its commitment to reduce greenhouse gas emissions, quite bluntly stated, “Given the future economic growth and associated growth in the energy sector, the peaking of emissions in Pakistan is expected to take place much beyond the year 2030. An exponential increase of [greenhouse gas] emissions for many decades is likely to occur before any decrease in emissions can be expected.”

Even some of the most climate progressive nations on earth have struggled as well.

Germany, a world leader on climate action, has failed to cut emissions and has actually seen emissions rise during the past two years. Germany may even have to buy its way out of a binding European Union agreement to lower emissions in the coming years.

In Brazil, emissions in most sectors are expected to rise at least until 2030. In Japan, political issues with nuclear energy will likely cause the use of coal for energy to increase by 2030. Poland and South Korea also have plans for coal expansions.

Compliance with the Paris Agreement globally has been nothing short of dismal. In fact, most nations will soon fail to meet their agreement-defined deadlines.

Without enforcement, however, the agreement and any promises made by countries are meaningless. This is not a new revelation. While the Paris talks were first occurring in 2015, former NASA scientist and prominent climate activist James Hansen called the talks “a fraud,” contending: “There is no action, just promises.”

The supposition that countries will stick with their respective targets leading up to 2030 and that post-Paris negotiations will lead to deep global de-carbonization of energy is a rather large and very generous assumption, if not purely wishful thinking.

The reality is that the Paris climate agreement is fundamentally flawed. This global commitment is nothing more than broken and empty promises.