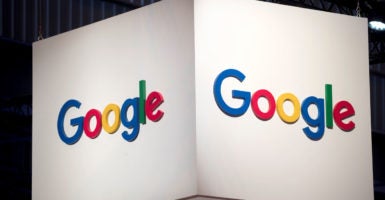 "Occasionally errors get through, and that’s what happened here,” a Google spokeswoman says. (Photo: Charles Platiau/Reuters/Newscom)

Google reportedly identified one of the ideologies of the California Republican Party as “Nazism” on its highly popular search platform.

The piece of inaccurate information, which is hyperlinked to presumably take web browsers to more information about the hateful, fascist persuasion, is found in the “knowledge panel,” a sidebar widget that presents further, more immediate information.

The feature has had problems before, specifically when an embedded fact-check feature tried to erroneously pin specious claims on articles written by The Daily Caller.

The most recent misattribution was first reported on by Vice News. Other ideologies listed besides Nazism, according to a screenshot obtained by Vice’s Alex Thompson, include “Conservatism, Market Liberalism, Fiscal conservatism, and Green conservatism.”

Many, especially those on the right, will suspect that it may have been done by a rogue Google employee or inadvertently through a flawed algorithm.

Google, however, told The Daily Caller News Foundation that it’s because sometimes “people vandalize public information sources, like Wikipedia, which can impact the information that appears in search.”

Wikipedia is for the most part open-source, meaning that almost anyone with only limited verification can add, amend, and delete information.

“We have systems in place that catch vandalism before it impacts search results, but occasionally errors get through, and that’s what happened here,” a Google spokeswoman said.

Nevertheless, it comes at an inopportune time for the subject as California primaries are less than a week way. It’s not clear how long the tag was up for, but absentee ballots have been casted for some time ahead of the elections.

The listing caught the attention, particularly the ire of many, of course, who are Republican or on that end of the political spectrum.

House Majority Leader Kevin McCarthy, for example, took notice and equated it to an apparent bias.

Sadly, this is just the latest incident in a disturbing trend to slander conservatives. These damaging actions must be held to account. #StopTheBias https://t.co/6ztyuc772s

The listing has since been removed, but how much damage it may have done is not clear. Google says it was only up for a short period of time.

“This would have been fixed systematically once we processed the removal from Wikipedia,” the company representative concluded. “But when we noticed the vandalism we worked quickly to accelerate this process to remove the erroneous information.”