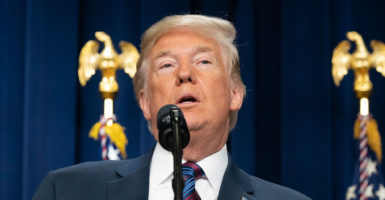 The American Federation of Government Employees filed a complaint over the order in a federal court in Washington, D.C. The union is asking the court to block one of the orders because it violates the First Amendment and separation of powers, according to Bloomberg.

“This is more than union busting—it’s democracy busting,” AFGE National President J. David Cox Sr. said in a statement Friday after the orders were announced. “These executive orders are a direct assault on the legal rights and protections that Congress has specifically guaranteed to the 2 million public-sector employees across the country who work for the federal government.”

The order in question limits the time federal workers can spend conducting union business—such as filing grievances and negotiating contracts—to 25 percent of their taxpayer-paid work time.

A May 17 report by the Office of Personnel Management found federal workers spent $174.8 million worth of time on union activities in 2016—all of it taxpayer funded—InsideSources reported.

“The data shows that Taxpayer Funded Union Time is at a steady increase,” Jeff T.H. Pon, director of the Office of Personnel Management, said, according to InsideSources. “This administration is passionate about protecting hardworking Americans and the use of their tax dollars.”