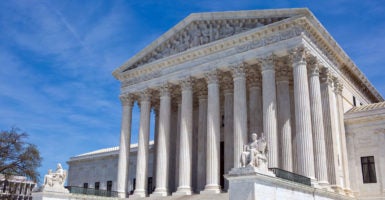 This week, the Supreme Court declined to take up Planned Parenthood’s challenge to a 2015 Arkansas law intended to protect women experiencing complications after a medication abortion.

The commonsense reform would require clinics that provide abortion-inducing drugs to have an arrangement with a doctor at a nearby hospital. In the case of an emergency, that doctor could then treat the woman at the hospital—something the Arkansas Legislature determined is necessary in light of the myriad complications that can result from a drug-induced abortion.

In a 2017 report, the Food and Drug Administration indicated there have been 22 reported deaths caused by medication abortions since the drug was approved in 2000.

Before Arkansas’ law could go into effect, Planned Parenthood got a district judge in Little Rock to stay its implementation. The abortion giant argued that it has been unable to find a doctor with admitting privileges who is willing to enter into an agreement with its two clinics in Arkansas. Since these locations do not provide surgical abortions, Planned Parenthood says it may have to shut down its operations in Arkansas, leaving only one remaining abortion clinic in the state.

Under Supreme Court precedent, states may enact abortion regulations so long as they do not have the purpose or effect of imposing an undue burden on women seeking an abortion before viability. Planned Parenthood brought a facial challenge, claiming the law is unconstitutional in every application, rather than as applied to its locations in Arkansas.

The Supreme Court has explained that the standard for a facial challenge to an abortion regulation is whether “in a large fraction of the cases in which [the law] is relevant, it will operate as a substantial obstacle … ”

Last July, a three-judge panel of the 8th U.S. Circuit Court of Appeals reversed the district court. Writing for the court, Judge Raymond Gruender (who is on President Donald Trump’s Supreme Court short list) explained that the district court needed to conduct more detailed fact-finding in order to halt the law.

The district court had determined that the law was an “undue burden” by focusing on women from Fayetteville who would be required to travel 380 miles to the remaining clinic in Little Rock. The appeals court panel estimated that, based on the record in the case, fewer than 6 percent of women seeking medication abortions would be negatively affected by the new law, expressing skepticism about whether that would qualify as a “large fraction.” But the panel gave the district court a second chance at making the necessary findings to support its injunction.

Instead of going back to the district court, however, Planned Parenthood asked the Supreme Court to intervene, seeking a summary reversal of the 8th Circuit’s ruling. Planned Parenthood claims that this case is nearly identical to a 2016 decision striking down Texas’ admitting privileges law, so the court could avoid rehashing the same arguments and simply reverse the lower court.

But the Supreme Court, unsurprisingly, declined to do that.

One reason may be because the two cases are not nearly identical. In the Texas case, the court reviewed the state’s requirements that all doctors who perform abortions obtain admitting privileges and clinics meet the same health and safety standards set for other ambulatory surgical centers.

By contrast, the Arkansas statute only deals with medication abortions, not all abortion procedures, and doesn’t require doctors performing abortions to have admitting privileges themselves. Instead, the Arkansas law requires that medication abortion providers have a contractual arrangement with a doctor who has admitting privileges at a nearby hospital in the event of complications.

Further, the justices typically wait until legal disputes have had a full airing in the lower courts before agreeing to step in. The court’s decision not to take up a case does not shed light on the justices’ views on the merits of the case. Indeed, it’s possible that this very challenge could end up back at the Supreme Court in the future.

For now, Planned Parenthood will return to the district court.

At the heart of this case is a state’s effort to put women’s health and safety first. Though advocates of abortion claim it is one of the safest medical procedures, drug-induced abortions can have serious side effects and complications for women, including infection and uterine hemorrhage.

When it passed this law in 2015, the Arkansas Legislature found that more than 600 hospitalizations, roughly 250 infections, and at least eight deaths were attributable to medication abortions. It was with these risks in mind that the Legislature enacted the new law.

Planned Parenthood claims a 24-hour nurse’s hotline is good enough for women experiencing complications after an abortion, but Arkansas decided that women deserve better. In the more than 40 years since the Supreme Court invented a constitutional right to abortion, the abortion industry has evaded and fought commonsense regulations, like this one, at every step.

This latest case is yet another example of the long, deadly shadow that the Supreme Court’s abortion decisions have cast over law, medicine, and society.