Supreme Court to Police: Get Off the People’s Lawn 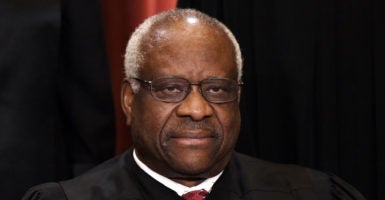 Justice Clarence Thomas is a “fearless originalist” who’s not afraid to clear out past cases that stand in the way of the original meaning of the Constitution. (Photo: Olivier Douliery/UPI/Newscom)

This week, the Supreme Court held that the Fourth Amendment does not permit a police officer to enter uninvited onto someone’s driveway to search a parked vehicle, without first obtaining a warrant.

That’s an important ruling, since no one wants police officers roaming across their private property searching for evidence of a crime. But Justice Clarence Thomas raised another important issue in a concurring opinion: In that scenario, what remedy should there be against the officer’s unlawful behavior?

Thomas proposed an answer that bucks Supreme Court precedent, but holds true to the original meaning of the Constitution.

The Fourth Amendment protects against unreasonable searches and seizures, and generally requires police to obtain a warrant before searching or seizing someone’s property. The Supreme Court has recognized several exceptions to the warrant requirement, however, including for automobiles—since they can be driven off at a moment’s notice, and are subject to manifold regulations, courts will allow police to search vehicles based on probable cause that a crime has occurred without first obtaining a warrant.

The court has also determined that police may not search the curtilage of a home (that is, the area immediately surrounding a home) without a warrant.

Finally, the court has established that when a Fourth Amendment violation is found, typically a judge-made rule called “the exclusionary rule” applies, which commands the trial court to exclude evidence that was obtained illegally.

This week, in Collins v. Virginia, eight members of the court agreed that when the automobile exception and protection of the curtilage collide, the latter wins the day.

An Albemarle County, Virginia, police officer walked up the driveway of a woman’s home to inspect what he believed to be a motorcycle that had been involved in two separate traffic violations and high-speed police evasions, and was likely stolen.

At trial, Collins filed an unsuccessful motion to suppress evidence arguing that the officer’s search had violated the Fourth Amendment’s warrant requirement. Collins was convicted of receiving stolen property, and the Virginia Court of Appeals and Virginia Supreme Court affirmed his conviction.

The Supreme Court rejected the Virginia courts’ rulings this week. Writing for the majority, Justice Sonia Sotomayor called this an “easy case,” explaining that the “scope of the automobile exception extends no further than the automobile itself.” To find otherwise, she concluded, would “transform what was meant to be an exception into a tool with far broader application.”

Sotomayor left open for the state court to assess whether another exception to the warrant requirement, such as exigent circumstances, would apply to the warrantless search in this case.

Justice Samuel Alito dissented, remarking that the “hallmark” of the Fourth Amendment is reasonableness—and the police officer’s conduct here was “entirely reasonable.”

Where this case gets really interesting, though, is Thomas’ concurrence. He agreed with the majority that a Fourth Amendment violation had occurred, but wrote separately to express his doubts about the court’s ability to impose the exclusionary rule on state courts.

Thomas explained: “The assumption that state courts must apply the federal exclusionary rule is legally dubious, and many jurists have complained that it encourages ‘distort[ions]’ in substantive Fourth Amendment law.”

Thomas noted that the framers of the Fourth Amendment (as well as the 14th Amendment, which applied the Fourth Amendment to the states) “would agree that a constitutional violation occurred here,” but “they would be deeply confused about the posture of this case and the remedy that [the defendant] is seeking.”

Thomas asserted that excluding illegally obtained evidence is not the appropriate remedy, particularly where there was no historical support for such a remedy at the time of the Fourth Amendment’s passage. He explained:

No such rule existed in “Roman [l]aw, Napoleonic [l]aw[,] or even the [c]ommon [l]aw of England. … Historically, the only remedies for unconstitutional searches and seizures were “tort suits” and “self-help.”

As Benjamin Cardozo, then a New York Court of Appeals judge and later a Supreme Court justice, put it: The rule allowed “the criminal … to go free because the constable has blundered.”

Ever the originalist, Thomas encouraged the Supreme Court to revisit its 1961 decision in Mapp v. Ohio, requiring state courts to follow the exclusionary rule. Thomas noted that the rule is not “grounded in the Constitution or a federal statute,” so he questions how it may bind the states.

Only the Constitution, laws, and treaties are “supreme law of the land” that can bind the states. In his view, states should be free to enact their own exclusionary rules rather than being forced to adopt a rule created by federal judges.

Thomas summed up his concurrence by noting: “I am skeptical of this Court’s authority to impose the exclusionary rule on the states. We have not yet revisited that question in light of our modern precedents, which reject Mapp’s essential premise that the exclusionary rule is required by the Constitution. We should do so.”

In 1985, then-Attorney General Edwin Meese III said that the federal exclusionary rule “helps the guilty criminal, which is one of the tragedies … in our system of jurisprudence, where valid, probative evidence—the truth in other words—is excluded from a trial.”

Relaxing or rescinding that rule vis-à-vis the states would let them craft state exclusionary rules that might find a better balance between protecting defendant’s rights and public safety.

But the Constitution would not require the states to do anything.

The federal exclusionary rule was created as a matter of judicial policy “to deter future Fourth Amendment violations,” wrote Thomas, and the Supreme Court has “noted the lack of evidence supporting its deterrent effect,” while it has “recognized the effectiveness of alternative deterrents such as state tort law, state criminal law, internal police discipline, and [federal civil rights] suits.”

In light of those shortcomings, perhaps some states will now accept Thomas’ invitation to ask the court to rethink the rule. No other justice joined Thomas in making this call. That’s, perhaps, a reflection of the fact that Thomas is a “fearless originalist” who’s not afraid to clear out past cases that stand in the way of the original meaning of the Constitution.

Whether other justices would join Thomas if such a case arose remains to be seen. But one thing is certain: Thomas will continue laying the foundation for a return to the original meaning of the Constitution.