Thanks to Trump’s New Rule, Fewer Tax Dollars Will Go to Abortion Providers 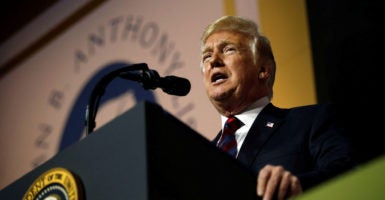 Earlier this month, the Trump administration proposed new rules to finally bring federal policy back in line with federal law. This should not be controversial in a republic committed to the rule of law.

But this new policy touches the question of abortion, which tempts all three branches of our federal government to turn truth, justice, and the law inside out.

President Donald Trump is resisting those temptations and affirming that the law should do what it says.

The particular law in question is the Public Health Service Act. Every year, it allocates hundreds of millions of taxpayer dollars to public health centers across the country.

Under the 1970 statute, no Public Health Service dollars “shall be used in programs where abortion is a method of family planning.” That is, the bill was explicitly written to fund health care for lower-income communities—including family planning services—but not to fund or facilitate abortion.

Yet in the 1980s, the General Accounting Office found that abortion providers were co-locating their non-abortion and abortion-providing services, and just keeping two sets of books.

In response, regulations correcting this obvious abuse of the law were implemented, and upheld by the Supreme Court.

But then subsequent Democratic presidents rescinded these regulations, leaving the abortion industry free to indulge its ever-growing appetite for Americans’ blood and treasure.

This is the unacceptable status quo that the Trump administration would correct.

By reinstating some of those prior regulations, Trump is following through on his campaign promise to get taxpayer money out of the abortion industry.

This is to his great credit. Wherever you stand on the question of legalized killing of unborn children, it is essential that we draw the line at taxpayer funding of it.

The new rule will indeed reduce the flow of federal dollars to abortion providers, including the billion-dollar behemoth of the grisly industry, Planned Parenthood. And even a modest step in this direction—in this case, about 15 percent—is to be commended.

In addition to incremental reform, this new rule is also a clarifying test. After all, it does not deny Planned Parenthood or any co-located clinics anything. It simply offers them a choice.

If, despite their billions of dollars of taxpayer subsidies and private donations, Planned Parenthood can’t afford two local facilities—one for abortion and one for non-abortion care and counseling—they will just have to choose which clinic to keep open.

They will have to decide—or perhaps, just publicly admit—what business they are really in: health care or abortion—life or death.

Of course, we already know the answer. As The New York Times recently put it, abortion is to Planned Parenthood what the internet is to Facebook.

That’s why Planned Parenthood is widely expected to lead a lawsuit to block the regulation as soon as it is implemented.

Our abortion-on-demand legal regime today is doubly unjust. First, because it was created by judges rather than elected lawmakers, and second, because it denies the undeniable humanity of the unborn.

Trump’s new policy would improve the law on both counts. It would bring the administration of the law back into line with Congress’ clear, statutory text, and it would signal that in this White House, the protection of innocent human life will be the guiding principle it should be in civilized society.