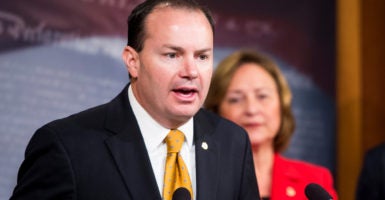 “If we continue to allow federal government spending to grow faster than the economy as a whole, at some point economic reality will force us to do so in a much more painful manner later,” says Sen. Mike Lee, R-Utah. (Photo: Bill Clark/CQ Roll Call/Newscom)

Republican lawmakers have introduced a bill that would claw back $15 billion in appropriated spending, following the lead of President Donald Trump, who submitted a rescission request earlier this month.

“Yes, a $15 billion spending reduction is a drop in the bucket compared to a $15 trillion debt,” Sen. Mike Lee, R-Utah, said in a statement provided to The Daily Signal.

“But we have to start cutting spending somewhere,” Lee said of the bill introduced Friday. “Because if we don’t, if we continue to allow federal government spending to grow faster than the economy as a whole, at some point, economic reality will force us to do so in a much more painful manner later.”

The bill would claw back expired funding from the Children’s Health Insurance Program, or CHIP, among other federal programs.

“The president’s plan follows one guiding principle: Money that is sitting in federal agencies and not being spent should be returned to taxpayers,” Office of Management and Budget Director Mick Mulvaney said in an op-ed May 22 in The Washington Post.

Trump identified cuts in planned spending and sent them to Congress on May 8.

Sen. John Kennedy, R-La., told The Daily Signal that Congress’ acting on the rescission package shows that it’s serious about being fiscally responsible.

“Washington has long been spending tax dollars like a bunch of drunken sailors, with zero regard for the debt we are loading onto future generations,” Kennedy said. “This bill is a small step, but a good start towards restoring a little fiscal sanity to the swamp.”

Congress hasn’t used rescissions to cut planned spending in about 20 years, but every president from Gerald Ford to Bill Clinton has used the process successfully, according to the White House.

Senate Majority Leader Mitch McConnell, R-Ky., on May 8, said the Senate would consider passing a rescissions package if the House does so.

Debate is limited to two hours in the House and 10 hours in the Senate, the Conservative Partnership Institute noted in a report.

Congress could pursue clawing back some other appropriated funding in another rescission package that would involve some spending in the omnibus budget bill reluctantly signed March 23 by Trump.

The process cannot be used to cut mandatory spending, including for entitlement programs, such as Medicare, Medicaid, Social Security, and food stamps.

“Our country doesn’t have a revenue problem. It has a spending problem,” Sen. Ron Johnson, R-Wis., said in a statement provided to The Daily Signal.

“While these cuts won’t solve our debt problems—far from it—they are an important step in the right direction by eliminating unnecessary and excessive spending throughout the federal government,” he said.

“Rescinding these dollars now ensures that Congress doesn’t use them as a budget gimmick later,” Ernst said. “This rescissions bill is a commonsense initiative to ensure that the federal government is a better and more effective steward of hardworking Americans’ money.”

Fred Lucas contributed to this report.