To Vietnam, Freedom of Expression Is a ‘National Security Offense’ 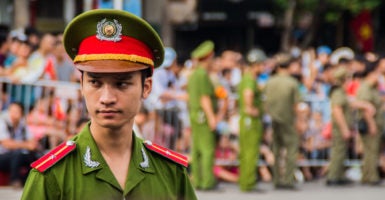 Sang Hyuk Park is a member of the Young Leaders Program at The Heritage Foundation.

“In Vietnam, there is no such thing as a ‘prisoner of conscience,’ and there’s no such thing as people being arrested for ‘freely expressing opinion,’” Vietnamese Foreign Ministry spokeswoman Le Thi Thu Hang told reporters in April.

The exact opposite is true.

In Vietnam, activist groups campaigning for democracy and environmental protection are often treated as criminals “aiming to overthrow” the state.

Since 2006, Nguyen, 38, has written extensively on controversial issues, such as deaths in police custody, government policies toward China, and environmental issues.

She was arrested in 2016 because her critical postings allegedly “caused detriment to national security and social order.” Last year, the People’s Court of Khanh Hoa sentenced her to 10 years’ imprisonment for “conducting propaganda against the state” under Article 88 of the country’s 1999 penal code.

Last November, Human Rights Watch reported that Nguyen’s mother and fellow activists staged a protest outside the court. They defended her innocence and condemned the unfairness of the trial, upon learning that the appeals court upheld the original verdict.

But within minutes, protesters were attacked by several men in civilian clothes who did not hesitate to beat them in the presence of uniformed police, who did not take any action to stop them.

In addition to lengthy prison sentences, political prisoners of Vietnam are often singled out for physical abuse and solitary confinement. Prison authorities reportedly assault the prisoners to exact “confessions.”

Detainees with health problems are compelled to admit to crimes for which they are then convicted if they want necessary medical treatment. To make family visits difficult, political prisoners were often held far away from their homes.

Domestic and international communities alike have urged the government to repeal the vaguely defined national security provisions, which are frequently cited to punish people for peacefully exercising their rights.

However, according to the Vietnam Committee on Human Rights, a new penal code that came into force this year not only preserved the problematic provisions, but also made amendments that criminalize “preparation” for such “crimes.”

To make matters worse, the revised penal code introduced a new provision that holds lawyers criminally responsible for failing to report their clients to the authorities for a number of crimes, including national security offenses.

Despite some prisoners’ releases upon completed sentences, 2017 and the first quarter of 2018 saw a net increase in the number of prisoners of conscience over previous years.

The Vietnamese government’s response to condemnations of its human rights record has been intensified suppression of people’s freedom to silence their growing voices.