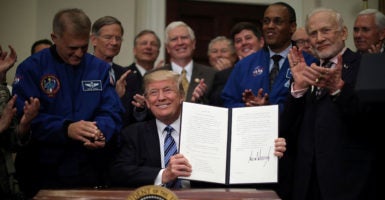 President Donald Trump signed a space policy directive on Thursday, May 25. Here he is pictured on June 30 of last year in the White House with former astronaut Buzz Aldrin. (Photo: Carlos Barria/Reuters/Newscom)

President Donald Trump on Thursday signed a space policy directive, calling for “updating and refocusing” those policies in a bid to promote innovation and modernize American commercial space policy.

This is the second space policy directive the president has issued, after taking into account recommendations made by the National Space Council. Trump revived the council, which disbanded in 1993.

Space is a topic that Trump frequently references. He has discussed his hopes for future space exploration on multiple occasions—even contemplating a military “space force.”

It dovetails with the vision of former House Speaker Newt Gingrich, who shares the president’s interest in space exploration. During his 2012 presidential run, he spoke of routine flights to Mars and envisioned base camps on the moon. Gingrich, who spoke at The Heritage Foundation this week, discussed the opportunities at hand.

“Space is vitally important to us, because it’s how we break out beyond the planet. It increases the chance of our surviving as a species dramatically, and somebody’s going to do it, and I would rather it be an American who does it in the name of freedom than somebody from China who does it in the name of dictatorship,” the former Georgia congressman told The Daily Signal this week.

“And, my hope is that President Trump and Vice President [Mike] Pence are going to lead a very aggressive effort to move America into space,” Gingrich added.

Space exploration is an opportunity for the president to put his stamp on something monumental, but he wouldn’t be the first president to do so.

“Now it is time to take longer strides, time for a great new American enterprise, time for this nation to take a clearly leading role in space achievement, which in many ways may hold the key to our future on earth,” President John F. Kennedy said 57 years ago Friday on May 25, 1961, in an address to Congress.

Kennedy proposed a full commitment to a space program in the midst of the Cold War with the Soviet Union, a situation he referred to as an “ongoing battle around the world … between freedom and tyranny.” The space race of the 1960s further dramatized the U.S.-Soviet rivalry.

The president acknowledged that his proposal would require a tremendous commitment of financial and other resources, but he thought that Americans could and would rise to the challenge. They did—and with bipartisan support in Congress.

The speech was a pivotal moment in Kennedy’s presidency, and although he would not live to see his vision realized with Americans landing on the moon on July 20, 1969, it represented one of the most important moments in American history.

Though Kennedy gave his speech more than a half-century ago, space remains a “new frontier,” still relatively untapped and uncharted—and with limitless potential.

“Space has the potential to bring out the best in our citizens, in our nation, and our values, and can grant the U.S. the opportunity to be in a leadership role,” Kennedy said.

Through reforms that make commercial space entrepreneurship and innovation more feasible, Trump is seeking to address the cost issues constraining them.

“No one can predict with certainty what the ultimate meaning will be of mastery of space,” Kennedy proclaimed.