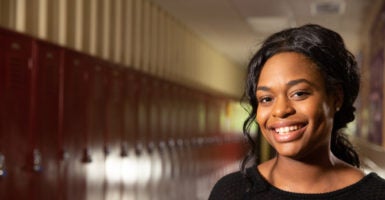 “One day when I was in school, I walked into the bathroom and immediately when you walk in the bathroom, there is actually a mirror there, and I saw a reflection of a man,” Alexis Lightcap said. “My body went into immediate shock.” (Photo courtesy: Alliance Defending Freedom)

A Pennsylvania student said Thursday that her school opening its locker rooms, showers, and restrooms to students of the opposite sex is unfair and wrong.

“There are good ways to make room for everyone, without letting a boy into the girls’ locker rooms, shower areas, or restrooms,” said Alexis Lightcap, a senior at Boyertown Area Senior High School in Boyertown, Pennsylvania, who is also in a lawsuit against Boyertown Area School District, at a press conference.

“That is why I joined this lawsuit, so no other girl has to go through what I went through. It is common sense that boys shouldn’t be in girls’ locker rooms, restrooms, and shower areas. Every student matters and schools should put our privacy, safety, and dignity first.”

Judges Theodore McKee, Patty Shwartz, and Richard Lowell Nygaard ruled 3-0 against student privacy, Holcomb said. “We are currently evaluating our options, [but] it is very likely that we will seek en banc review with the 3rd Circuit to ask a full panel of the 3rd Circuit Court of Appeals to consider the issue of student privacy.”

En banc review would allow more judges to weigh in on the lawsuit rather than just the panel of three.

Students and parents appealed the lawsuit to the 3rd Circuit in September of last year, according to Alliance Defending Freedom.

The school opened its restroom and locker room facilities during the 2016-17 school year to students of the opposite sex without warning, Holcomb said.

“Without notice to parents or to students, Boyertown High School ignored its duties to respect the privacy, the safety, and the dignity of Alexis and her fellow students,” Holcomb said during the press conference, adding:

To her shock, she was told, due to a new and unannounced school policy, she would be sharing the restroom, locker rooms, and shower changing facilities with boys. Today, we asked the court to protect Alexis’ right to privacy, safety, and dignity in her own school.

“The Supreme Court has already spoken that the real differences between men and women means that privacy must be protected in the areas that it matters most, in locker rooms, restrooms, and shower changing facilities,” Holcomb said. “Today’s decision is out of step with the long-standing protection for privacy and we will continue to advocate for these young students.”

Aidan deStefano, a transgender student who graduated last year from Boyertown Area High School, said, according to Metro Weekly, “Reversing the practices that have allowed me and other trans kids to thrive at school would have been devastating. I’m glad other transgender students will know the experience of being treated like any other student.”

Lightcap communicated the concern to her grade level principal but was ignored, Holcomb said in the video.

“After Alexis encountered that guy in the girl’s bathroom, she turned and ran out of the restroom and we actually have video footage of her fleeing the restroom in fear,” Holcomb said, adding:

She went to her grade level principal … and Alexis told Dr. Foley what had happened to her, how scared she was, how concerned she was, but Dr. Foley didn’t seem to care, he didn’t listen, he didn’t fix it, he basically told her, ‘This is the new school policy and this is the way things will be.’

“My voice didn’t matter, I knew that,” Lightcap said in the video. “I wish that the school had protected my privacy somehow, because it felt like a specific group of people were protected, while the greater population was not.”

The Daily Signal requested comment from Foley and the Boyertown Area School District but did not receive a response by publication deadline.

Ryan T. Anderson, author of “When Harry Became Sally: Responding to the Transgender Moment” and a senior research fellow at The Heritage Foundation, told The Daily Signal in an email that the Boyertown policy is wrong.

“Schools should protect the bodily privacy of their students,” Anderson said. “The reason we have separate bathrooms and locker rooms for boys and girls is not because of ‘gender identity’ but because of the bodily differences between males and females.”