Hungary’s Experiment Could Rebuild a Sense of Nation in Europe 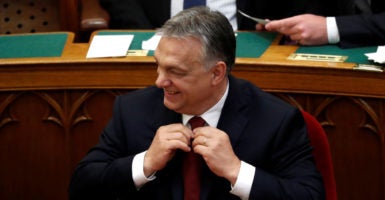 Four years ago, Orban gave his critics ammunition when he said he was constructing an “illiberal democracy.” This month he doubled down, declaring liberal democracy dead and urging other European leaders to stop trying to revive the corpse.

Instead, Orban exhorted them to get busy invoking a new democracy based on Christian principles.

“Liberal democracy is no longer able to protect people’s dignity, provide freedom, guarantee physical security or maintain Christian culture,” he said in Hungary’s parliament earlier this month. “Some in Europe are still tinkering with it, because they believe that they can repair it, but they fail to understand that it is not the structure that is defective: The world has changed.”

The response, he added, is “to replace the shipwreck of liberal democracy by building 21st-century Christian democracy.”

For many reasons, Orban deserves our attention when he says his ambition—“now we want to hunt really big game” is precisely how he put it—is to change the course of Europe.

He is flushed with an electoral victory in which his party last month captured more votes than all of the opposition combined. He has defeated German Chancellor Angela Merkel on the important philosophical debate over immigration (Orban says it should be lowered). And he has vanquished the leftist billionaire George Soros, who just announced his nongovernmental organization is leaving Hungary.

Most importantly, the question of values is the fundamental issue confronting the Continent. Unlike the United States, modern European states are not founded upon creedal documents that lay out the constituting character and culture of the nation, and how to preserve them.

When “Europe” was more or less coterminous with “Christendom,” that text was the Bible. The culture that defined all the European nations—the paintings, the music, the festivals, the folk wisdom—was suffused with Christianity and its imagery. Greco-Judeo-Christian ethics bonded Portuguese and Finns in the absence of DNA or language links.

As Europe has de-Christianized, at best it has evolved into a values-free, empty husk. At worst it has become a supranational entity that pretends adherence to hate-speech codes, mandatory work rules, open borders, and coercion of everyone into publicly affirming lifestyles they find repugnant—all violations of different freedoms, and ironically of liberalism itself—now form “European values.”

Orban thumbs his nose at European Union pieties with gusto, which is why he can be forgiven if he uses provocative terms to attract attention to an important project.

But first it is important to note obvious downsides. Orban is no Thomas Jefferson, and his emphasis on ethnicity, not civic nationalism contained within borders, is sui generis.

If you believe that all men are created equal, are endowed by their Creator with certain unalienable rights, and that governments are instituted “to secure these rights” and “the blessings of liberty,” then the type of state that Orban wants to build is likely not your bag.

He says he believes that Hungarians are exceptional innately, not as a result of national traits that are acquirable. “We are a unique species,” he said last week. “There is a world which we alone see.”

This Hungarian nation is not geographically defined within juridical and electoral boundaries. The Hungarian nation, Orban said four years ago, “sometimes coincides with the country’s borders, sometimes doesn’t.”

Most important, securing individuals’ liberties is most assuredly not the central purpose of the state he is busy creating. As he said, again, in the 2014 speech:

“The new state that we are constructing in Hungary is an illiberal state, a non-liberal state. It does not reject the fundamental principles of liberalism such as freedom, and I could list a few more, but it does not make this ideology the central element of state organization, but instead includes a different, special, national approach.” (Emphasis added.)

There is good reason why ethnic, rather than civic, nationalism gives us pause. Though ethnic nationalism is unassailable from a natural rights perspective, it does de-emphasize the individual’s agency by making citizenship (belonging) non-volitional.

All of this is less of an indictment of Orban than one would think, however. First, he’s building a state for Hungarians, not Americans—and we must remember that even though safeguarding freedom must be our central animating spirit, to do that, we too, must preserve America’s unique culture.

Also, Hungarians are more ethnically separate than­­­­­ most. They are descended from seven tribes that emerged out of Central Asia more than a millennium ago and settled eventually in the Carpathian Basin.

Surrounded by a sea of German and Slavic, they continue to speak a language that is Asian in origin, not European, and to have distinct foods and customs. They are highly homogenous at home, and have enclaves in neighboring countries who are still considered part of the “Hungarian nation.”

And Orban is not—with due respect to his critics—vowing to pursue his project by depriving Hungarians of their freedom or property. He really doesn’t have a beef with liberal democracy, if understood as a system of representative government where the rule of the majority is checked by constitutional guarantees for minority rights and checks and balances prevent tyranny. Though he does not make freedom “the central element” of his project, he does secure people’s rights. He’s not Putin, Castro, or Xi Jinping.

It is instructive that for Orban, the inflection point for systemic change was the 2008 financial crisis. What he saw, what many saw, was intellectual and financial elites, transnational in outlook, suffering less than their working-class compatriots. He is trying to reconstruct a sense of nation.

By attempting to reintroduce the Judeo-Christian ethic into a secularized Europe, Orban arguably is giving Europe a chance to do just that. Even if the ethnic model he and his electorate may be pursuing is irreplicable in America or most of Western Europe, the values model could have a lot to offer.­­­