The Hubris of Judges Threatens Our Ability to Govern Ourselves 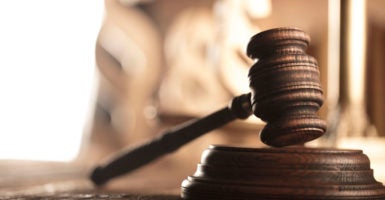 Judges have taken on an unprecedented degree of power in American life. (Photo: Zolnierek/Getty Images)

Why? The justices felt the 2011 districts were political gerrymandering and discriminated against Democrats. Of course, the elected Pennsylvania Supreme Court justices are mostly Democrats.

This usurpation of a legislative function should be considered dangerous, regardless of one’s political affiliation. It was a concern of the Founding Fathers.

Ironically, it was Elbridge Gerry—after whom the word “gerrymandering” was created and who was a Massachusetts delegate to the Constitutional Convention of 1787—who warned about judicial imposition. He voiced his concern about the “sophistry of the judges.”

Federalist 78 warned that judges might exercise their will instead of their judgment in their interpretation of laws. Federalist 81 declared that allowing the judiciary to construe the law would enable it to mold its own laws.

This has occurred more and more as judges at state and federal levels expropriate power assigned to the other two branches of government.

Federal judges attempted to usurp executive branch authority in terrorist detainee cases during the Bush administration and again most recently in the case of President Donald Trump’s lawful orders to restrict those wishing to enter the United States from nations where terrorists take refuge from the law.

But this commandeering of government is not a recent practice. Over the years, judges have demonstrated a desire to intercede in nonjusticiable affairs—just as was predicted in Federalist 78.

For example, in 1987, District Judge Russell Clark actually ordered a tax increase to fund a desegregation plan for Kansas City schools. Clark, an appointee of President Jimmy Carter, ordered a 150 percent increase in property taxes in Kansas City, Missouri, and a 1.5 percent income tax for Kansas City, and decreed that the state of Missouri was to pay the balance.

Since when did the Constitution authorize a judge to order a tax increase?

In other cities, judges have ordered criminals released from incarceration for no reason other than jails and prisons being—in their opinion—“overcrowded.”

Still other judges have reversed referenda. Judge Thelton Henderson issued an injunction against California’s Proposition 209, which was aimed at dismantling state affirmative-action programs based on sex or race.

Proposition 209 was lawfully enacted by Californians in 1996, but Henderson, also a Carter appointee, thought his opinions to be superior to that of the electorate.

A panel of the 9th U.S. Circuit Court of Appeals subsequently overturned Henderson’s ruling. In his majority opinion, Judge Diarmuid O’Scannlain wrote, “A system which permits one judge to block with the stroke of a pen what 4,736,180 state residents voted to enact as law tests the integrity of our constitutional democracy.”

Would that all judges believed that were true, but they don’t. Indeed, it seems that we are moving toward a judiciocracy. Americans all along the ideological continuum need to remember that America is not ruled by judges.

Our country is a nation of the people, for the people, and by the people—and not just the people with the most prestigious law degrees.