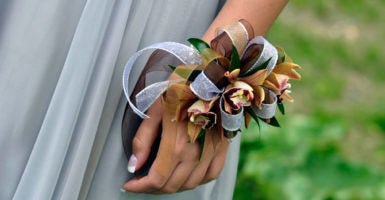 A New Jersey high school principal apologized Friday for a “Party Like It’s 1776” theme at prom.

“I especially apologize to our African-American students, who I have let down by not initially recognizing the inappropriateness of this wording,” Perry wrote in a statement.

To make up for what he deemed an indiscretion, the principal said students would not need to bring their prom tickets in order to get into the event—they would instead only need to state their names to be matched up with a list of who bought tickets. Cherry Hill High School would also give every student attendee a “commemorative” ticket displaying a new design at the prom. Perry stated that a “diverse group of people” would review information distributed by the school prior to its dissemination in the future.

Lloyd Henderson, president of the Camden County NAACP East Chapter, saw the incident indicative of a school culture “where African-American students’ needs are not considered along with the rest of the school,” but mentioned that he appreciated Perry’s speedy response.

Cherry Hill High School made headlines in February when it suspended social studies teacher Timothy Locke after Locke told students to remember him if he died defending them during a school shooting.