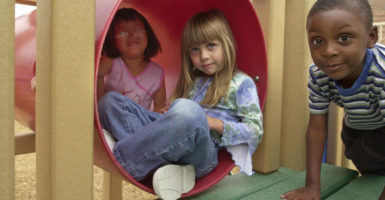 For the past decade, left-wing activists have targeted faith-based adoption agencies if they do not assist same-sex couples who wish to adopt. Through lawsuits and legislation, these activists gave faith-based agencies an ultimatum: Comply with politically correct views on sexuality and marriage and place children with same-sex couples, or shut down.

Faced with this dilemma, Steve Roach, executive director of Catholic Charities for the Diocese of Springfield in Illinois, closed the foster care and adoption programs he ran in the state. The cost? In an interview with The Daily Signal, Roach estimates that 3,000 children were affected and thousands of  foster parents no longer will be part of the system.

Now, he advocates passage of the Child Welfare Provider Inclusion Act, federal legislation to prohibit discriminating or taking other adverse action against a child welfare service provider that declines to provide, facilitate, or refer for a service that conflicts with the provider’s sincerely held religious beliefs. Learn more in the transcript of the interview, which was lightly edited for clarity.

Kelsey Harkness: Tell us what happened to your adoption and foster care program run through Catholic Charities, and how you found yourself in this situation.

Roach: In 2011, the state of Illinois passed a law which effectively ended up shutting down foster care and adoption programs for Catholic Charities and a couple of other faith-based organizations in Illinois.

We were definitely forced out of foster care and adoption. The law was called the Religious Freedom Protection and Civil Unions Act. The language in that law required that all agencies providing this service must place children in the homes of same-sex couples.

My faith and our religion believes in the definition of marriage as between a man and a woman, and we could not abide by that new state requirement. So after 50 years of providing quality foster care for children, for tens of thousands of children all across Illinois, the state said, “Well, if you do not surrender that religious belief, you will be eradicated.” And that’s what happened.

Roach: We believed that a child is raised best with a mother and a father. Married mother and father. We did provide homes with single parents as long as those parents were not cohabitating. Research shows that a lot of abuse happens in homes via the live-in paramour. So our policy was if you’re a single adult, and you qualify, we will work with you.

Harkness: What do you say to someone from the ACLU or from the other side that calls you “anti-gay?”

Roach: We just say that’s not the case. What we were was an organization that tried to provide quality foster homes for abused and neglected kids, and we did it very well. We were one of the best at it. I want to say, what’s the solution for these kids who are suffering? That’s what we need to be doing.

Harkness: Can same-sex parents still adopt children, whether faith-based agencies are a part of the system or not?

Roach: Absolutely. The [proposed] Child Welfare Provider Inclusion Act does not prevent anyone from becoming a foster or adoptive parent. In Illinois, we know all same-sex couples can be served because without Catholic Charities, they all are being served.

So with Catholic Charities in the picture, it wouldn’t change that. This [proposed] law does not prevent anyone from the opportunity to become a foster and adoptive parent.

Harkness: What were the consequences of being shut down?

The consequences were something that we had predicted. We were one of the most effective organizations in the state of Illinois in recruiting quality foster parents. And now, one only has to look at the headlines and see that there is a shortage of quality foster homes, not only in Illinois but across the country.

That’s only been exacerbated now in the last few years by the opioid epidemic. And so at a time where foster parents were in desperate need, you have quality organizations with a long-standing history of being able to find them being forced to the sidelines.

Harkness: Why is Catholic Charities so good at recruiting foster parents compared to your average organization?

Roach: It has a lot to do with our long history. Not only had we been providing foster care and a partnership with the state of Illinois since the early ’70s, late ’60s, but for over 100 years Catholic Charities had been finding adoptive homes, working with various Catholic orphanages.

So we have this huge, long history. It is a mission, it’s something that we hold very near and dear to our hearts. Children need homes and that’s what the church has been involved with for a long, long time. And I think that’s why we’re really, really good at what we do.

Harkness: What happens if other faith-based adoption agencies get pushed out of the system?

Roach: I think the travesty is perpetuated. The crisis will be made worse. The children are the one who’ve suffered in all this. This was clearly an argument on rights. Our side believe this was a religious liberty argument, and we will always believe that. The other side believes that this was a civil rights argument, and so we had a conflict within the public-private partnership that had worked well since the Great Depression.

And instead of resolving the conflict by putting the kids first and coming up with a solution that would help those kids, all we did was shout at each other, and that’s all they’re doing right now. You discriminate, or you’re anti-gay, or you’re anti-God, and all we do is we argue and fight.

In the meantime, you have thousands of kids who are suffering. So if this continues to happen, the number of kids suffering will only grow. We have to be adults in the room; we can’t be shouting, we’ve got to help these kids. There is a solution. The Child Welfare Provider Inclusion Act provides that solution.

The solution should do two things. One, it should ensure that anyone who wants to do this difficult work, and it is very difficult work—it’s not a right, no one has a right to become a foster parent or adoptive [parent]—anyone who wants to do this work should allow religious organizations to abide by their religious faith in providing these services. The second thing should be that the solution should be done in the best interest of kids.

This act does all of that. It takes away the argument and says we’re gonna focus on kids. So if everyone can be served who wants to be a foster parent or adoptive parent, and religious organizations can practice this service according to their faith, then everyone wins because the kids then will have the maximum opportunity to find a quality forever home. And that’s what we need to be focused on. That’s not what happened in Illinois.

Harkness: You’re now advocating to address this from the federal level. Why?

Roach: The fight that I described earlier, religious liberties versus civil rights, is happening in several other states around the country. The ACLU is continually perpetuating lawsuits to try and attempt to drive out religious organizations that have the radical belief that marriage is between a man and a woman.

Harkness: In general, how bad is the foster care and adoption crisis?

Roach: Do a simple Google search. You’ll see headline after headline after headline in states across the country where there’s a foster home shortage. Not only in Illinois but in many, many other states. I’ve read articles where they can’t find homes and so kids are staying in offices because there’s no home for them to be placed in. It has reached a crisis proportion, and it’s been exacerbated by the opioid crisis.

There have been studies that have shown that the need for foster homes has increased because there are a lot more kids now coming into care because [of] neglect, because the parents are so addicted that their addiction is their only focus. Children are being left home alone, children are being not fed, children are not going to school. And so the state is coming in and removing those children because they’re in dangerous situations. And so it has definitely grown the need.

We are in a very difficult situation right now, and these kids are suffering. We need to think about how can we, as a society, reach out to all segments of our population to find people who would provide care and homes for these children. We don’t need to be shunning people and organizations. We need to be maximizing our opportunities to find these parents.

Harkness: Where do you go from here?

Roach: One of our strengths is that we are able to provide a wide array of services. And so after this happened to us, our bishop and our board began planning to see what else we could do out there to fulfill the mission of providing mercy and love to people who are hurting.