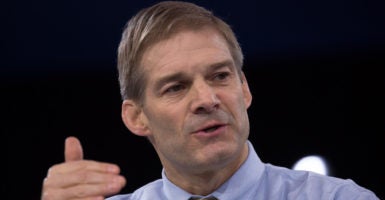 Rep. Jim Jordan says President Donald Trump has accomplished a lot in his nearly 17 months in office but Congress has dropped the ball on making good on promises to the American people.

“Taxes have been cut, the economy is growing, unemployment is at its lowest level, [Justice Neil] Gorsuch is on the court, ISIS is backpedaling, the Iran deal is finished, North and South Korea have met, the hostages have come home, and three days ago, the embassy was put in Jerusalem,” Jordan, R-Ohio, said Thursday at an address to the Conservative Action Project.

He said Congress has disappointed the American people by caving to leadership and passing bad policy like the March 23 last-minute $1.3 trillion omnibus spending bill, failing to fund Trump’s border wall, and funding things against conservative values like Planned Parenthood, as well as failing to repeal Obamacare.

“The president … is keeping his promises, but we’re not,” Jordan said. “And really all it comes down to is a little toughness and a little willingness to just do what you said and have a little bit of discipline.”

Jordan said that lawmakers need to return to the importance of passing policy that strengthens the basic tenets of American conservative values, including faith, family, freedom, and the rule of law.

“The first institution the good lord put together wasn’t the church, wasn’t the state—it was moms, dads, and kids,” Jordan said, adding:

He also warned that freedom and the rule of law are under attack in America, citing how officials in powerful positions have targeted conservative Americans for their views.

During IRS division chief Lois Lerner’s tenure at the IRS, she reportedly targeted tea party groups and “admitted that the agency put additional scrutiny into the applications for nonprofit tax status of conservative and Tea Party groups,” according to NPR.

Jordan also said that Americans should be concerned by the double standard of justice that he says is present with the investigation of Trump’s supposed collusion with Russia during the 2016 election campaign.

“Today, we know that the FBI took an opposition research document, dressed it all up, made it look like legitimate intelligence, took it to a secret court to get a secret warrant to spy on a fellow American citizen associated with the other party’s campaign and they didn’t tell the court who paid for that document,” Jordan said.

“If your name is Clinton, Comey, Lynch, Lerner, you get a different deal than us regular citizens, and it is not supposed to work that way in this country,” Jordan continued, referring to former presidential candidate and Secretary of State Hillary Clinton, former FBI Director James Comey, and former Attorney General Loretta Lynch.

Jordan said he and his colleagues must make good on their promises to turn the tide.

“Our charge and challenge is real simple: just defend the principles that made us special in the first place,” Jordan said.