How the Media Just Created a Powerful New Lie About Trump 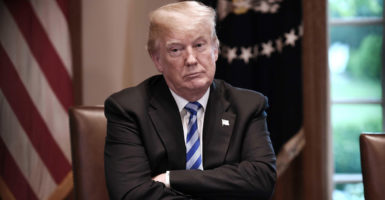 On Wednesday, President Trump spoke with California officials about immigration policy at a roundtable. (Photo: face to face/ZUMA Press/Newscom)

If you’ve been scanning news headlines in the past 24 hours, you might have read that President Donald Trump on Wednesday called immigrants “animals.”

Here are a few of the headlines:

“Trump ramps up rhetoric on undocumented immigrants: ‘These aren’t people. These are animals.’” (USA Today)

Then, Mediate did a nice roundup of tweets from news outlets that also promoted the narrative:

“These aren’t people. These are animals.” President Trump used the harsh rhetoric to describe some undocumented immigrants during a California “sanctuary state” roundtable. https://t.co/mOwXilRtwE pic.twitter.com/eYC6XhtR57

“We’re taking people out of the country. You wouldn’t believe how bad these people are. These aren’t people — these are animals.” During a meeting with public officials who oppose California’s sanctuary policies, Pres. Trump criticized US immigration laws https://t.co/2KcrIhMnyR pic.twitter.com/SsmCdaofHb

Pres. Trump refers to some who cross the border illegally as ‘animals,’ not people. “You wouldn’t believe how bad these people are.”

The president was holding a roundtable discussion with California elected officials who oppose the state’s sanctuary law. https://t.co/YfrZxC89CB pic.twitter.com/uvhKp9vwrO

So, between the tweets and the headlines, we have six of the biggest news outlets in the United States promoting the narrative that Trump called illegal immigrants “animals” during a roundtable Wednesday.

There’s just one catch: The president was referring to MS-13 gang members.

The first 12 seconds, below – that magically went missing in newsrooms across America — regarding POTUS comments on MS-13 being “ANIMALS!” pic.twitter.com/YGgnHR8m1U

If you look at the full transcript from the White House, here’s what was said:

Fresno County Sheriff Margaret Mims: Thank you. There could be an MS-13 member I know about—if they don’t reach a certain threshold, I cannot tell ICE about it.

Trump: We have people coming into the country, or trying to come in—and we’re stopping a lot of them—but we’re taking people out of the country. You wouldn’t believe how bad these people are. These aren’t people. These are animals. And we’re taking them out of the country at a level and at a rate that’s never happened before. And because of the weak laws, they come in fast, we get them, we release them, we get them again, we bring them out. It’s crazy.

So, if you read the full transcript, it’s an extremely reasonable assumption Trump was referring to members of the notorious gang MS-13 as “animals,” not all—or many—illegal immigrants.

Yet, none of these headlines or tweets note that the “some” illegal immigrants are actually gang members.

Personally, I’d rather never call another human being, no matter how reprehensible his actions, an “animal.”

Those are very different statements.

Now, the Associated Press at least has taken responsibility for leaving out context, tweeting today:

AP has deleted a tweet from late Wednesday on Trump’s “animals” comment about immigrants because it wasn’t made clear that he was speaking after a comment about gang members.

That’s good—and other media outlets should step up to the plate. Readers deserve accurate reporting from outlets that say they are objective and nonideological, not slanted reporting that completely eliminates crucial context.