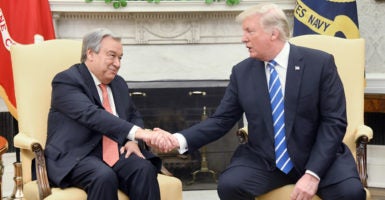 In a defining stretch of his presidency, Donald Trump will spend the next two days meeting with leaders of two international bodies he has criticized—the United Nations and the North Atlantic Treaty Organization.

The meetings come after the Trump administration’s actions in Israel and Iran irked some European allies, and ahead of a likely meeting June 12 in Singapore between Trump and North Korean dictator Kim Jong Un.

The NATO Summit follows on July 12 in Brussels.

“The meeting between President Trump and Secretary-General Guterres will reaffirm the commitment of the United States to improving the efficiency and effectiveness of the United Nations,” White House press secretary Sarah Huckabee Sanders said in a statement Monday.

“The two leaders will discuss issues of mutual interest, including North Korea, Syria, and reform of the United Nations, as well as other common threats and challenges.”

Here are six key points that Trump likely will address with the two leaders.

The meetings come days after the opening of the new U.S. Embassy in Israel’s capital, Jerusalem. Since 1966, the embassy had been in Tel Aviv, in large part because of the claims on Jerusalem still made by Israel’s enemies in the Arab world.

In December, the U.N. General Assembly voted to condemn the Trump administration’s decision to locate the embassy in Jerusalem, although the move has been U.S. policy since President Bill Clinton signed the Jerusalem Embassy Relocation Act in 1995.

Hamas, a Palestinian terrorist group, helped organize a protest outside the opening ceremony for the American Embassy. Israeli military defending the area killed more than 50 Palestinians as a mob of protesters stormed fencing.

Although controversial, the embassy might not be a paramount matter, said James Carafano, vice president for national security and foreign policy at The Heritage Foundation.

“The embassy only sustains as an issue if the other Arab states get involved,” Carafano told The Daily Signal.

The Trump administration last week pulled the U.S. out of the 2015 Iran nuclear deal, riling enough European allies that the move is sure to be a key discussion point with the NATO and U.N. leaders, Carafano said.

“The Iran deal is going to continue to dominate all of the conversations,” Carafano said. “The administration knew that when they made the decision, that it was going to be hard for people to let that go.”

European leaders have talked about trying to salvage the deal, but Carafano doesn’t see that as likely.

“The reality is that the Europeans have very few options about the way forward on the Iran deal,” Carafano said. “At the end of the day, they actually share a lot of U.S. concerns about the security issue regarding Iran and their destabilizing influence in the region. So, people can say they are going to work to preserve the Iran deal, but I don’t really think there is a lot of momentum behind that.”

And, he added, European countries that were not involved in making the deal are less enthused about preserving it.

“Europeans are actually split and ambivalent about it,” Carafano said. “It’s a very big deal for the Germans and the French and the British. But it’s not a big deal for a lot of the other countries.”

North Korean dictator Kim Jong Un threatened Tuesday to cancel the highly anticipated meeting with Trump, asserting he didn’t want a one-sided meeting over denuclearization. The threat comes after Kim’s release of three U.S. prisoners and a pledge to denuclearize.

Asked about the status of the meeting, Trump told the press pool Wednesday:

This could be an empty threat given so much progress toward peace between North Korea and South Korea, said Bill Roggio, a senior fellow for the Foundation for Defense of Democracies and editor of The Long War Journal.

“North Korea seems to be likely going down a positive path,” Roggio told The Daily Signal. “The Iran deal, not so much. Europe wanted to go down a different path and might try to do something to save it.”

A strong, verifiable deal with North Korea would change the dynamics of the Iran discussion going forward, Carafano said. He anticipated that Trump and the two leaders would discuss Kim and North Korea.

“There will be a lot of discussion about North Korea too, because Europeans are very, very interested in the North Korean situation,” Carafano said.

“There is a lot of similarity between the Iran situation and North Korea because if the North Koreans actually come to the table and do a serious deal, that would put a lot more pressure on the Iranians and make it much, much harder for the Europeans to try to sustain the Iran deal,” Carafano said. “So things are really linked.”

Problems continue in Syria, one of the hot spots that Sanders said the president would speak about to the U.N. leader.

Syrian dictator Bashar Assad’s military took control Wednesday of the country’s largest province with roads into Damascus, Aleppo, and Homs. It’s the first time the government held control of the area since civil war erupted in 2011.

Two cylinders dropped by Syrian forces on the rebel-held city of Saraqeb in February—sending nearly a dozen people to seek medical help for nausea and other symptoms—contained chlorine, according to the Organization for the Prohibition of Chemical Weapons.

Assad’s chief backer has been Russia President Vladimir Putin. Russia’s military moves could be one reason more European countries are paying for their own defense, Carafano said.

As candidate and as president, Trump has called for allies in NATO to pony up and pay more for their own defense.

A rarely enforced provision of NATO membership is that nations pledge to spend 2 percent of their gross domestic product on defense. However, most fail to meet their obligations.

Of NATO’s 29 member states, only the United States, Greece, Poland, Britain, Romania and Estonia pay what they should. Other wealthy countries, including Germany, Italy, Canada, and Spain, pay slightly over or slightly under 1 percent.

That’s not likely to change, the Foundation for Defense of Democracies’ Roggio said.

“There is no real burden sharing. The U.S. is really carrying the load and always will on defense spending,” Roggio said, adding:

Trump isn’t the first president to be concerned about pushing the rest of the world to step up. Obama tried to lead from behind. There is not a ton of daylight between them in that regard. They may be taking a different approach. Obama wanted the Europeans to be partners. Trump is more forceful. Getting out of the Iran deal could force Europeans to step up in a more active role.

However, Carafano said European countries are moving in the right direction, even if too few are meeting their obligations.

“The United States continues to stress burden sharing, so there is no way burden sharing won’t come up as an issue,” Carafano said.

“There has been a fair amount of progress,” he said. “It is a consistent theme for the U.S. I can’t imagine that it doesn’t get addressed. But I don’t have any sense that it’s going to be clearly dramatic one way or another.”

Roggio said he worries that Trump and the U.N. and NATO leaders will not address the continuing struggle in Afghanistan.

“The Taliban threatens capitals, and the situation continues to deteriorate,” Roggio said.

He said he understands Americans’ frustration with being in Afghanistan since after the 9/11 attacks, but he said the world can’t abandon the country.

“If you were OK with the Taliban reaching pre-9/11 capabilities, then maybe we can abandon Afghanistan,” Roggio said. “Scores of Europeans have been killed, some in large-scale attacks.”

Correction: This story was corrected to include Romania among NATO countries that spend 2 percent of its GDP on defense.