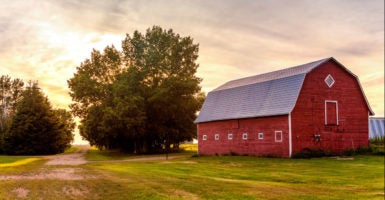 The farm bill in its current form would carry on the status quo of favoritism and government subsidies. (Photo: robynleigh/Getty Images)

The House is expected to consider its farm bill this week, but in its current form, the bill is a disaster when it comes to farm subsidies (crop insurance and commodity programs).

Many legislators have introduced a wide range of amendments that, if passed, could help take a step in the right direction on subsidy reform.

The following are some critical farm subsidy reform amendments (plus one critical regulatory amendment):

The concept of reducing premium subsidies has wide support, including in President Donald Trump’s fiscal 2019 budget and President Barack Obama’s fiscal 2014 budget, as well as from the Government Accountability Office.

Further, the Congressional Budget Office has repeatedly identified reducing premium subsidies as a policy option to cut the federal deficit.

Critics will argue that this would hurt participation in the crop insurance program. However, the research overwhelmingly indicates otherwise.

According to the GAO: “The [Obama] administration, CBO, and other researchers say that a modest reduction in premium subsidies would have little impact on program participation, and that incentives, such as the continued high level of premium subsidies, would likely keep farmers in the program.”

The CBO found that reducing premium subsidies by 15 percentage points to 47 percent would reduce the number of insured acres (300 million) by just one-half of 1 percent, to 298.5 million acres. It also explained that 1.5 percent of insured acres would have lower coverage levels. The CBO estimated that this reform would save $8.1 billion over 10 years.

That change is arguably the most important subsidy reform, with massive benefits and little to no costs.

This amendment would help put an end to the federal government’s trying to regulate almost every body of water imaginable.

Congress needs to define what “navigable waters” means, and that will help to ensure that the Environmental Protection Agency and U.S. Army Corps of Engineers will no longer be able to continue their long-standing power grabs.

Most farmers don’t receive subsidies. However, almost every farmer and rancher is affected by federal attempts to undermine their property rights through expansive interpretations of what waters are regulated under the Clean Water Act.

If the farm bill is supposed to develop policy on the issues that affect farmers and ranchers, then the House farm bill needs to define “navigable waters.”

3. Reform the Federal Sugar Program
Amendment No. 32
Sponsors: Rep. Virginia Foxx, R-N.C., and many others

The federal sugar program should be eliminated. It’s unfortunate that no such amendment has been introduced.

However, this amendment would provide some reforms, including getting rid of marketing allotments that limit how much sugar can be sold.

Even in comparison to other farm subsidy programs, the federal sugar program stands out in its level of backwardness and central planning. The government intentionally drives up sugar prices through various methods of restricting supply.

Sugar program proponents like to claim it is a no-cost program. They simply mean it is no cost to taxpayers, but even that isn’t true. From fiscal 2019 to 2028, the CBO projects it will cost $76 million.

Taxpayers should not shoulder open-ended liability for these two programs.

The House recognized that during the previous farm bill debate. By an overwhelming bipartisan vote of 267 to 156, the House passed an amendment to its farm bill that would have limited the cost of these two programs to 110 percent of the projected CBO costs for the first five years of these programs.

The cap was included in the final House farm bill that went to conference. If that amendment, introduced by Foxx, had not been removed in conference, taxpayers would have saved about $14 billion. The Agricultural Risk Coverage and Price Loss Coverage programs are costing far more ($31 billion) than what the cap would have allowed ($17 billion).

The cap in this proposed amendment is set at more than $30 billion for five years, meaning if the cap were reached, the programs could cost a jaw-dropping $6 billion a year. To put this in perspective, the cap in the previous House farm bill (which wasn’t included in the final 2014 farm bill) was about $17 billion for five years, or $3.4 billion a year.

This amendment should be a no-brainer. It may or may not save money (depending on whether Agricultural Risk Coverage and Price Loss Coverage costs stay within or exceed the cap), but it does ensure that the cost to taxpayers has a limit.

According to the GAO, “the crop insurance program’s target rate of return—the average annual rate of return that insurance companies are expected to earn—does not reflect market conditions.”

The current target rate of return is 14.5 percent, and the amendment would reduce it to 12 percent. Even that is still likely overly generous.

The Trump administration’s fiscal 2019 budget included this recommendation, reducing the target rate of return to 12 percent, and the estimated savings is $3 billion over 10 years.

This amendment would ensure that taxpayers won’t be subsidizing the Brazilian cotton industry. In other words, it’s common sense, and the fact it even needs to be added in the first place shows the extreme nature of the House Agriculture Committee’s farm bill.

Under the bill, American taxpayers could be on the hook for payments to Brazilian cotton growers. Taxpayers have already paid about $800 million to Brazil in recent years to settle a long-standing trade dispute over the United States’ trade-distorting cotton subsidies.

In the most recent farm bill, Congress intentionally sought to avoid further trade problems by not including cotton in the Agricultural Risk Coverage and Price Loss Coverage programs.

The committee’s farm bill would irresponsibly risk another trade dispute by including cotton as part of  these programs, which very well could lead to taxpayers again paying millions of dollars to Brazil in order to settle a new dispute.

As it is, cotton is already one of the most heavily subsidized commodities, even without being added to these programs.

This amendment would simply do what Congress already did in the most recent farm bill and ensure that taxpayers are not paying to fund Brazilian agriculture.

“Limits crop insurance subsidies to only those producers that have an adjusted gross income of $500,000 or less.”

“Limits commodity and conservation assistance to only those producers that have an adjusted gross income of $500,000 or less.”

“Establishes transparency and accountability requirements for check-off programs. It requires that a check-off board or its employees or agents acting in their official capacity may not engage in any act that may involve a conflict of interest, anti-competitive activity, unfair or deceptive act or practice, or act that may be disparaging to, or in any way negatively portray, another agricultural commodity or product.”

“Limits eligibility for federal commodity payments to only actively engaged farmers and one farm manager per farm.”

This list isn’t exhaustive, but these amendments are some of the most critical. When the House considers its farm bill, these commonsense changes, most of which are supported across the ideological spectrum, should become part of the final House legislation.