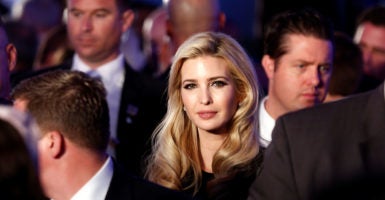 Ivanka Trump in Jerusalem, Israel, on May 13 for the new embassy opening. (Photo: Amir Cohen/Reuters/Newscom)

Perhaps because they never were on board with President Donald Trump’s promise to move the U.S. Embassy from Tel Aviv to Jerusalem, some have unfairly targeted Ivanka Trump in the aftermath of the embassy opening.

There has been an outrageous effort to both implicitly and explicitly connect Ivanka’s presence in Jerusalem at the embassy opening to the violent Hamas protests and riots along the border.

The most egregious example is the cover of the New York Daily News, featuring a picture of a smiling Ivanka Trump by the headline “Daddy’s Little Ghoul.”

But the New York Daily News was far from the only critic. “The juxtaposition of images of dead and wounded Palestinians and Ivanka Trump smiling in Jerusalem like a Zionist Marie Antoinette tell us a lot about America’s relationship to Israel right now,” wrote New York Times columnist Michelle Goldberg.

MSNBC’s Joe Scarborough said, “For the rest of the world you actually saw an administration, a White House, and—we’ll say it since Ivanka Trump was there—a family completely out of touch with the realities of the region that they’re dealing with.”

Even comedian Stephen Colbert joined in, referring to Ivanka as “Peace Treaty Barbie.”

Her presence at the opening was extremely appropriate considering she represents the Trump administration and is Jewish. And the appearance of her husband, Jared Kushner, was also appropriate: He’s been tasked with working on Middle Eastern affairs and is the grandson of Holocaust survivors.

Nor was Ivanka wrong to show excitement over the opening of the embassy. Let’s remember: An eventual embassy move to Jerusalem was already ingrained in U.S. foreign policy before Donald Trump’s election. Congress passed the Jerusalem Embassy Act of 1995 with a bipartisan majority under President Bill Clinton.

That legislation required the U.S. Embassy to move from Tel Aviv to Jerusalem by 1999, unless a president delayed it on grounds of national security.

At the end of the day, Trump followed through on a long-held promise—and there was nothing wrong with Ivanka Trump revealing her appreciation of the day finally arriving.

And it’s frankly outrageous to hold Ivanka responsible for Hamas’ actions. As The Heritage Foundation’s Jim Phillips, an expert in Middle Eastern affairs, noted on The Daily Signal podcast Monday when discussing the Palestinian protests, Israel “has to defend its borders, and I would blame all of this on Hamas, which is organizing these demonstrations. Hamas is considered a terrorist organization not only by the U.S. and Israel but by the [European Union].”

Or as United Nations Ambassador Nikki Haley pointed out Tuesday: “The Hamas terrorist organization has been inciting violence for years, long before the United States decided to move our embassy.”

But the media’s behavior shouldn’t be surprising. It has been common practice during this administration’s tenure to avoid inconvenient truths.

The media resists acknowledging any of the president’s successes—and he has had a “winning” past few weeks, especially in the foreign policy sphere.

From ending the Iran deal to getting back hostages from North Korea, and capturing top ISIS leaders, the president racked up some major victories the past two weeks.

Hamas is an opportunistic aggravator and terrorist organization.

Our media should be careful to not play into its propaganda, and this includes unfairly targeting Ivanka Trump.

Such behavior doesn’t hurt the right, and it doesn’t just hurt Ivanka—it hurts all Americans, because it gives Hamas the media attention it wants and further divides our country.