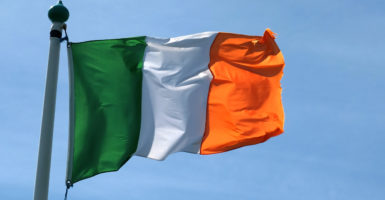 An Irish flag flies in Dublin. Ireland's 12.5 percent corporate tax rate is controversial among other European nations, but has brought a big boost for the small nation's economy. (Photo: Jens Kalaene/DPA/Picture-Alliance/Newscom)

Many U.S.-based multinationals are finding luck with Ireland’s low corporate tax rate—and that 12.5 percent rate has been a pot of gold for the Irish economy as well.

“Tax competitiveness has brought our country the only prosperity we’ve known,” @U2 says.

In 2015, the Irish economy was estimated to have grown by 26.3 percent through foreign companies opening operations and providing high-paying jobs, including about 700 U.S. companies currently operating in the country.

The Irish corporate tax rate is about half the average for other countries in the Organization for Economic Cooperation and Development, which comprises 34 developed nations.

Ireland’s rate is less than half of what some other European countries’ corporate tax rates are: Belgium, for example, has a rate of 33.9 percent; Austria’s rate is 25 percent; and Greece’s is 29 percent.

It’s also still lower than the U.S. corporate rate, despite the latter being slashed last year from 35 percent to 21 percent.

“Ireland’s internationally low corporate tax rate is something to be admired,” Adam Michel, economic policy analyst for The Heritage Foundation, told The Daily Signal. “The flood of foreign investment into Ireland from the U.S. and around the world shows how an attractive business environment benefits the whole economy.”

Michel said the 20-plus percent economic growth statistics are exaggerated and based largely on artificial income shifting. But, he added, big increases in research and development jobs, new business headquarters, and traditional manufacturing are clearly real.

“In the U.S., we largely have Ireland to thank for the increasing pressure placed on the U.S. to lower our corporate tax rate,” Michel said. “The pressures of tax competition and competition for global investment is a force for good policy and helped give U.S. policymakers a nudge in the right direction.”

The low corporate tax rate is not without controversy, as European Union officials are seeking “tax harmonization,” meaning similar rates, and accused Ireland of “stealing” revenue and jobs from other European nations.

Ireland ranked fourth on the Tax Foundation’s 2017 International Tax Competitiveness Index of 35 countries for corporate tax rates, and 16th overall for its entire tax environment. Estonia ranked first overall with a corporate tax rate of 20 percent. But that rate is only applied to distributed profits, which are earnings shared with shareholders as a dividend, according to the Tax Foundation.

Only Hungary has a lower corporate tax rate at 9 percent, the Tax Foundation says. The other countries with rates below 20 percent are Latvia at 15 percent and the Czech Republic, Poland, Slovenia, and the United Kingdom, which all have a 19 percent rate.

But Ireland’s economy is too reliant on the low rate to raise it, argues Eamon Delaney, director of the Hibernia Forum, an Irish free-market advocacy group.

“Let’s face it. There was a clear reason why we brought Apple and others to Ireland and why we have a low corporate tax rate,” Delaney wrote in an Irish Times op-ed in January. “It is the lifeblood of our economy, and in the past, we even had a lower tax model to bring jobs to our rain-washed shores.”

He explained a region of the country had a temporary zero percent corporate tax rate in the 1950s and 1960s to spur development.

One of Ireland’s best-known exports, Bono, the lead singer of U2, is a staunch defender of the tax rate.

“We are a tiny, little country. We don’t have scale, and our version of scale is to be innovative and to be clever, and tax competitiveness has brought our country the only prosperity we’ve known,” Bono told The Guardian in 2014.

“That’s how we got these companies here,” he said. “We don’t have natural resources. We have to be able to attract people.”

The Irish tax rate also has been good for the world, contends Chris Edwards, an economist with the Cato Institute, a libertarian think tank.

“Ireland’s lower rate has had an excellent effect globally, including on the United States, because it created an incentive for other countries to lower their rates,” Edwards told The Daily Signal.

Bono’s and Edwards’ views are backed up by research.

All else being equal, lower corporate tax rates increase the attractiveness of one EU country over another. However, market size and low production costs can play an even bigger role, according to a 2016 analysis by the Economic and Social Research Institute, an Irish research organization.

The analysis contends, if Ireland lost this competitive advantage, it would have a sweeping impact on its economy—whether that change resulted from increasing its corporate tax rate or nearby countries decreasing theirs.

So, a 1 percent point increase to 13.5 percent would reduce the likelihood of a foreign company choosing Ireland by 4.6 percent, the analysis said.

The Irish tax law’s rules for companies with significant “intellectual property”—namely, technology, pharmaceutical, and medical device companies—allow them to pay between zero and 3 percent. Among the companies that have taken advantage of that are Google, Microsoft, Pfizer, and Boston Scientific.

However, the company that has gotten the most attention in recent years has been Apple.

“This is the wrong time for the EU to persecute low-tax countries,” he said. “The U.S. already slashed their rates, and it’s more competitive than Europe on a number of other fronts.”

In a test case for competitive tax systems across the world, Ireland and Apple are appealing a European Commission ruling to force Apple to pay 13 billion euros (about $15.5 billion), because the EU determined in August 2016 that the tech giant got unfair tax treatment from Ireland.

Apple employs 4,000 people at a manufacturing plant in Cork, Ireland.

The 2016 ruling by the European Commission, the EU’s administrative body, contends that because of the “intellectual property” specifics of the deal, Apple ended up paying less than 1 percent of its Irish profits in taxes. Aid or subsidies are prohibited under EU rules as giving some companies an unfair advantage.

“What is the public good of the EU going after $15 billion from Apple?” Edwards asked. “Shouldn’t Europeans be glad to have an innovative company like that operating in Europe?”

For the EU to push for “tax harmonization” among member countries would be similar to forcing a unitary tax policy for states in the United States, said Grover Norquist, president of Americans for Tax Reform.

“This would be like New York or California and other loser states trying to impose their tax policies on Florida,” Norquist told The Daily Signal.

In an Apple statement issued in November, the U.S. company asserted:

When Ireland changed its tax laws in 2015, we complied by changing the residency of our Irish subsidiaries, and we informed Ireland, the European Commission, and the United States.

The changes we made did not reduce our tax payments in any country. In fact, our payments to Ireland increased significantly, and over the last three years, we’ve paid $1.5 billion in tax there—7 percent of all corporate income taxes paid in that country.

Our changes also ensured that our tax obligation to the United States was not reduced.

An April 2017 report by The Heritage Foundation on the Ireland-EU tax dispute warned of the potential harm attempting to impose higher taxes on sovereign countries could have on the global economy. The report said:

Efforts to suppress tax competition or to harmonize taxes are generally an effort to create a “tax cartel” among like-minded governments to keep taxes high.

The European Union’s Apple ruling, similar to other recent EU investigations of tax reductions, might have the effect of discouraging beneficial tax competition among European nations.