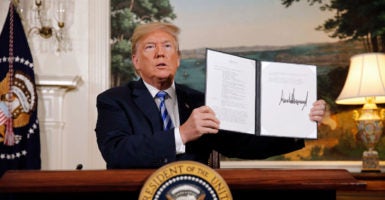 President Donald Trump pulled the plug on the Iran nuclear deal Tuesday, taking it off life support after months of warning that the flawed 2015 agreement needed to be ended or mended.

When it became clear that France, Germany, and the United Kingdom—three other signatories to the nuclear deal—could not reach an acceptable agreement with Washington on how to correct flaws in the deal, the president announced that the U.S. would withdraw from the agreement and re-impose sanctions:

We will be instituting the highest level of economic sanction. Any nation that helps Iran in its quest for nuclear weapons could also be strongly sanctioned by the United States. America will not be held hostage to nuclear blackmail.

In his speech, the president noted that at the heart of the nuclear agreement “was a giant fiction that a murderous regime desired only a peaceful nuclear energy program.”

The Iran deal is defective at its core. If we do nothing, we know exactly what will happen. In just a short period of time, the world’s leading state sponsor of terror will be on the cusp of acquiring the world’s most dangerous weapons.

Trump also warned, “If the regime continues its nuclear aspirations, it will have bigger problems than it has ever had before.”

But he was careful to distinguish between the regime and “the longsuffering people of Iran,” whom he assured: “The people of America stand with you.”

This implicit call for regime change was balanced with a willingness to negotiate a new deal with Iran. He acknowledged that Iran’s leaders had ruled out new nuclear negotiations, but ended on a hopeful note: “ … [T]hey are going to want to make a new and lasting deal, one that benefits all of Iran and the Iranian people. When they do, I am ready, willing, and able.”

This was precisely the right message to send. The diplomatic ball is now in Iran’s court.

Iran’s rulers can make the situation worse by threatening to crank up their nuclear program, or they can seek a diplomatic solution to their deepening economic problems.

Time to End or Mend the Iran Nuclear Agreement