I Didn’t Grow Up Around Guns. Here Are My 4 Observations From the NRA Convention. 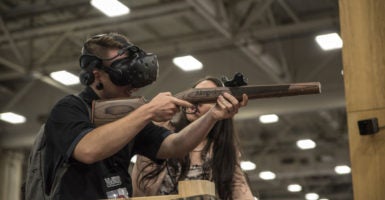 A convention attendee inspects a gun on the floor of the exhibition hall at the National Rifle Association meeting. (Photo: Sergio Flores/UPI/Newscom)

Jordan Hess is director of coalition relations at The Heritage Foundation.

I am a conservative. I did not grow up around guns. I can’t recall hearing my parents talk about guns in our home. My dad didn’t hunt and I never lived in an area prone to high crime or gun violence. Guns were never on my radar until I witnessed firsthand the debate over gun control in the U.S. Senate in 2013.

Since then I have come to understand the importance of the Second Amendment and that understanding grew even stronger this past weekend at the National Rifle Association convention in Dallas. Here a few of my observations and takeaways from the gathering that drew more than 87,000 people.

1. The NRA convention was a family affair.

The NRA convention was a place for families. Observing the thousands of families that attended the convention made me wish I had grown up around guns.

It was impressive to walk the floor of the exhibit hall and see dads and moms teaching their daughters and sons how to properly hold a gun. I overheard explanations of what different guns were used for and why this ammo was better than that ammo. For many of these kids, guns aren’t toys or just hobbies. Instead, gun ownership is a way of life.

2. The NRA convention was full of well-informed individuals.

As an exhibitor, I had the opportunity of shaking hands with and talking with many individuals. One of the biggest takeaways that I came back to Washington, D.C., with is that gun owners are well-informed. Gun owners even seem to have their own language, one that I need to learn. Some of these folks hunt to feed their families. Some shoot guns for fun. Others are members of gun clubs or belong to professional shooting teams.

These gun owners know exactly what they shoot and why they shoot. They are well-versed in the Constitution and the politics surrounding the debate over gun rights. They are also very interested in school safety and took over 3,000 school safety products from The Heritage Foundation’s booth. Anyone who claims that NRA members are uninformed or “sheep” needs to attend next year’s convention.

3. The NRA convention was a place of diversity.

Individuals and families came to Dallas from all corners of the nation. I personally met folks from Washington, Idaho, New York, California, Illinois, Ohio, Tennessee, and Missouri. The NRA convention attracted people of all races, religions, social classes, and ages.

The NRA moms and women of the NRA were out in full force. After attending the convention, I was not surprised at all to find out that women are one of the fastest-growing segments of the shooting sports business. These women and moms are passionate about protecting themselves and their families.

4. The NRA convention attracted the salt of the Earth.

The NRA convention was a peaceful place that attracted people who simply love freedom. I saw many a T-shirt that said: “Family, Faith, Friends, Flag, and Firearms: The 5 Things You Don’t Mess With.” These T-shirts paint a great picture of the type of people I interacted with for four days.

When the national anthem came over the loud speaker, every person in sight stopped, put their hand over their heart, and sang along. These are people who love their country, love the military, and love the sacrifices made by those who have fought to preserve freedom and liberty from the days of the Revolution down to today.

It’s true, many of these attendees fear for the future of the country and that is why they are involved in protecting their rights. I am grateful that so many of our neighbors, teachers, doctors, law enforcement, and family members are part of the NRA.