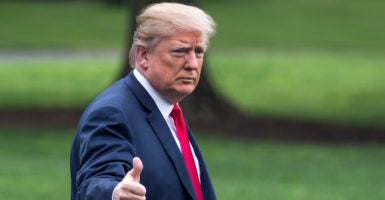 The Trump administration's proposal that Congress cancel $15 billion in spending will be "the first of several" such requests, a senior administration official says. (Photo: Polaris/Newscom)

The Trump administration intends to ask Congress to cancel $15 billion in spending Tuesday, although some conservative lawmakers say more could be done to reduce government waste.

“Tomorrow the president is going to be using his authority under the Impoundment Control Act to send up the largest rescissions package in history from a president,” a senior administration official said Monday evening on a conference call.

“This first package will be the first of several,” the senior official said. “It will be designed to go after unobligated balances, [funds] that have not been spent, and programs from prior years.”

Although the White House Office of Management and Budget does not seek to rescind spending in Congress’ recently passed $1.3 trillion omnibus bill, the official said, the administration will do that later.

“All of that will come in a future rescission package,” the official said.

The Daily Signal spoke earlier Monday with House conservatives who had their own ideas about how much spending to cancel.

“Absolutely we hope this is just the beginning, and we agree with the White House that this is the first step in the process,” Rep. Mark Walker, R-N.C., chairman of the largest Republican caucus in the House, told The Daily Signal in a phone interview earlier Monday.

A total of $11 billion in rescissions floated over the weekend would be “a little low” for conservatives’ liking, said Walker, leader of the Republican Study Committee, a group of 150-plus GOP lawmakers organized to achieve conservative goals.

“We hope that number comes at least across the $15 billion threshold,”  he said.

And asking Congress to cancel $15 billion in approved spending is the number the Office of Management and Budget finalized, Trump administration officials said in the conference call Monday evening.

“When I saw the [$11 billion] amount reported this morning, my reaction was that it was a good start but it is certainly not enough,” Rep. Jim Banks, R-Ind., told The Daily Signal in a phone interview Monday.

“And [I] would hope that this effort would lead to a larger effort to overhaul significant federal spending in the months ahead before the end of the Congress. That is certainly what my district expects us to do … to rein in federal spending.”

Justin Bogie, a senior policy analyst in fiscal affairs at The Heritage Foundation, said the final number might not be optimal but the good news is that Congress is looking at spending rescissions in the first place.

“Assuming the administration is serious about this being the first of several requests, then we think it is a good start,” Bogie told The Daily Signal in an interview Monday. “This hasn’t been used in 20 years, so it is kind of re-acclimates Congress to the process. They get to really see how it works.”

Presidents and lawmakers used rescissions in a bipartisan manner in the past, Banks said, and it should be no different today under President Donald Trump.

“If you go back and look at during the Reagan years, [there were] 214 rescissions, President Clinton [had] 111 rescissions,” Banks said. “This is the first rescission under Trump, and hopefully it will open up a larger discussion about how we can use this process substantially more to cut federal spending.”

“Mitch McConnell has again determined that very little is possible as the final outcome for spending reduction in the Senate,” Brat said. “And so the White House tried to do more upfront, [House Majority Leader Kevin] McCarthy tried to do more upfront; Mitch McConnell in the Senate said you can’t touch the omnibus package, and so they had to look for things elsewhere, and that’s what they did.”

Congress should pursue another rescission package that would cancel spending in the omnibus signed March 23 by Trump, Rep. Ken Buck, R-Colo., said.

“There is nothing that stops them from delivering another rescission package in a month that includes money from this omnibus,” Buck said in an interview Monday with The Daily Signal. “I think the omnibus is embarrassing, and I think it is really disgraceful that we passed a spending bill with that much money, creating that much deficit, with a Republican House, a Republican Senate, and a Republican White House.”

Lawmakers introduce rescissions as legislation in both the House and Senate and refer them to a committee; if the committee doesn’t act in 25 days, the rescissions may be thrown out.

Rep. Warren Davidson, R-Ohio, said rescinded spending ought to reduce the deficit and pave the way for a bill to repair the nation’s infrastructure.

“I would like to see a commitment to say, everything that we save over and above this $11 billion will go 50 percent for debt reduction and 50 percent toward an infrastructure bill,” Davidson said before the number was finalized. “And I think that would be a great start to a infrastructure [bill] and a great way to make sure the president doesn’t have to sign another bill that is at the same level.”