The FBI Shouldn’t Be Above the Law Either 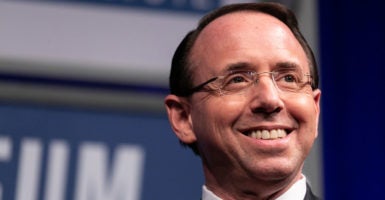 These days, a number of people seem to be under the impression that investigating President Donald Trump is the most vital project undertaken by this nation since its founding. Perhaps. But their feelings shouldn’t override the Constitution, because for all the principles allegedly being whittled away by this administration, its antagonists seem to be doing everything they can to keep pace.

For instance, while it might come as a surprise to many, the Justice Department is not an “independent” entity. Presumably, those who work for the DOJ have fealty to law and justice first, yes. But they are ultimately subordinates of the president of the United States, who was elected legally and has powers identical to those of former Presidents Barack Obama or George W. Bush.

And while it might also come as a surprise to some people, Congress—a separate, co-equal branch of government run, for the moment, by Republicans—is tasked with oversight of the executive branch, which includes the Justice Department. Now, you may deem Congress scandalously incompetent or hopelessly partisan, but it’s within the purview of a congressional committee to ask the FBI for documents pertaining to an ongoing investigation. Congress isn’t breaking the law or “extorting” anyone by asking for more transparency, as Rosenstein recently asserted.

Yet most Democrats (and never-Trumpers) have taken the exceptionally convenient position that not only should the president (well, this president) not have a say over the goings-on at the Justice Department but Congress (well, this Congress) also has no right to demand oversight. Most of the media frame their work accordingly, creating the impression the FBI doesn’t answer to anyone.

Fact is, Rosenstein has a habit of slow-walking documents to Congress that make the FBI look bad. This is a political consideration. The deputy attorney general is now refusing to hand over redacted documents that pertain to former Trump aide Michael Flynn’s statements about interacting with Russians. Will Flynn’s statements magically change if the public or Congress see them? Rosenstein has yet to explain why he’s not cooperating with a congressional inquiry. Instead, he plays martyr to a friendly media.

Last time we went through this charade, in fact, Democrats and their allies were claiming that releasing congressional findings on alleged FBI abuses would be a reckless attack on the nation’s security. Whatever you make of the veracity of the claims in the Devin Nunes memo, this claim turned out to be untrue. We went through a similar circus with the release of the James Comey memos, which ended up giving Americans more context to the endless leaks that have consumed news coverage for the past year and a half.

The idea that partisans and journalists who’ve made a living using favorable leaks regarding the investigations into the Trump administration are suddenly concerned about the sanctity of a criminal investigation is ludicrous. Moreover, Congress, whether you like it or not, is also conducting an investigation. Let’s see more, not less.

Which brings me to special counsel Robert Mueller. There has been a continued effort in Congress to pass a law insulating the special counsel, which would create a super prosecutor with wide-ranging autonomy that would allow him to investigate whatever he likes for as long as he likes. I’m not sure such a law would be constitutional, but it’s certainly an attack on the separation of powers.

Let’s face it: Most Democrats or Republicans have acted in partisan ways during the Russia collusion investigation because much of it is a partisan concern. The only thing left is to try to save the already-tattered process because by creating the impression that wholly constitutional actions are abuses, we are also creating precedents that undermine norms of governing oversight.

Now, firing Mueller would almost surely have major political ramifications, giving Democrats fodder to seek impeachment without any proof of criminality, much less “collusion.” And considering the questions Mueller reportedly wants to ask Trump—a net-casting expedition that has almost nothing to do with collusion—doing so would probably be an act of self-destruction on the president’s part.

This is all proper. But changing how government works by effectively stripping embedded constitutional oversights for political reasons is just another kind of corruption.