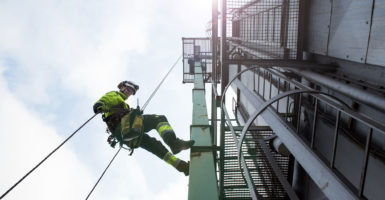 Unemployment dropped to 3.9 percent in April, the lowest unemployment rate since 2000, after remaining unchanged at 4.1 percent for several months, the Department of Labor reported Friday.

The latest Bureau of Labor Statistics report revealed roughly 164,000 jobs were added last month, about 30,000 fewer than some experts predicted but continuing the longest streak of consecutive monthly job growth at 91 months. The average wage also rose 4 cents an hour, and it’s up 2.6 percent since the start of the year.

“We’ve continued to add jobs routinely every month for so long, and the unemployment rate we have reached is amazing,” ZipRecruiter Chief Economist Catherine Barrera told The New York Times. “This is the economy doing well.”

Labor force participation has remained low, however, falling for the second straight month to 62.8 percent, near the lowest level recorded in the past half century, according to The Wall Street Journal.