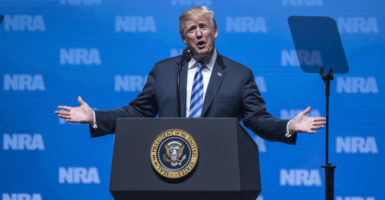 “If we’re going to outlaw guns like so many people want to do … we are going to have to outlaw immediately all vans and all trucks,” @POTUS says.

Here’s a look at four major topics the president addressed.

1. School Safety and the Second Amendment

After the Florida shooting, Democrats and many youth groups turned up the pressure to enact new gun control legislation.

Trump sarcastically asserted that terrorists have increased their use of trucks and vans to carry out assaults.

“It seems that if we’re going to outlaw guns like so many people want to do, Democrats … we are going to have to outlaw immediately all vans and all trucks, which are now the new form of death for the maniac terrorists,” he said. “They take a truck and run over people. So, let’s ban immediately all trucks, all vans, maybe all cars. How about cars? Let’s not sell any more cars.”

Ninety-eight percent of mass public shootings have occurred in places where guns are banned. Just so you understand that. Tragically, as we have seen, there is no sign more inviting to a mass killer than a sign that declares, ‘This school is a gun-free zone.’ Come in and take us. Ninety-eight percent.

Trump vowed that his administration will always defend the Second Amendment’s guarantee of the right to bear arms.

“Your Second Amendment rights are under siege, but they will never, ever be under siege as long as I’m your president,” he said to strong applause.

Trump attacked Democrats in Congress for opposing the closing of loopholes for illegal immigrants, such as the policy dubbed “catch and release,” and withholding federal funds from sanctuary cities, and allowing victims of violent crimes or their families to hold sanctuary cities liable.

“Democrats and liberals in Congress want to disarm Americans. At the same time, they are releasing dangerous criminal aliens and savage gang members onto our streets,” Trump said, later referring to the MS-13 gang. “My administration believes cities should be safe havens for Americans, not sanctuaries for criminals.”

Trump added: “We are not going to let our country be overwhelmed, and we are going to demand Congress seal our border in the upcoming [continuing resolution],” the funding measure that keeps the government operating.

Trump touted the more than 3 million new jobs created since his election, along with the falling unemployment rate. He again stressed that African-American unemployment had reached an all-time low during his administration.

The Labor Department announced Friday the jobless rate had fallen to 3.9 percent in April, its lowest level since 2000.

That’s when he pivoted to one of his most well-known and controversial supporters, rapper Kanye West.

“By the way, Kanye West must have some power, because you probably saw I doubled my African-American poll numbers,” Trump said.

West defended Trump on social media and in interviews last week and again this week.

Trump was referring to an April 22 poll by Reuters that found his approval rating among black Americans to be 11 percent. Reuters did another poll April 29 and found the number had doubled.

4. The Courts and the Constitution

Trump took credit for the rapid pace of naming appeals court judges to the bench, referring to how many vacancies his predecessor, Barack Obama, left him to fill.

“We need judges who will enforce our laws, protect our sovereignty, and uphold our American way of life,” Trump said. “The Constitution can’t be changed by judges, bureaucrats, or the United Nations. That is why we are appointing federal judges who will interpret the law as written.”

In my first year, I nominated, and the Senate confirmed, more circuit judges than any new administration by far in history, and we will have the all-time record very soon. President Obama was very nice to us because he left us a lot of [judicial vacancies], like, almost 140. I was very surprised. I was very happy.

We put an incredible new justice on the Supreme Court, Judge Neil Gorsuch. Yet virtually every single Democrat in the Senate opposed Neil Gorsuch, just like they have consistently opposed circuit and district court judges.

Trump said the Democratic Senate minority, led by Sen. Charles Schumer of New York, is “slow-walking” confirmation of most other executive branch nominees:

In the history of this country, there has never been anything like what the Democrats are doing [to] great people, who gave up their jobs and their lives to take a job as an ambassador or work for our government, and they can’t get approved because every single one of them is being slow-walked by the Democrats. What they are doing—Schumer and the group—is disgraceful.