What Trump Should Say on Cinco de Mayo 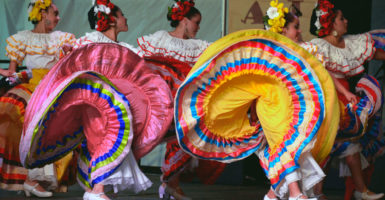 President Donald Trump should recognize how Mexican-Americans have helped make America great and can make it better under his leadership. (Photo: Danita Delimont Photography/Newscom)

President Donald Trump is famously difficult to write speeches for, and his relationship with Mexican-Americans has been strained by comments made, so any speechwriter crafting an address for Cinco de Mayo would have a challenge. Having worn this hat at the State Department and the Securities and Exchange Commission during the George W. Bush administration, this is the advice I’d give him:

First, be yourself. Authenticity has been good to you and your numbers are climbing nicely.

So be the disrupter you have been so far and reject the worn-out models that have failed. Don’t try “outreach” to Hispanics, Latinos, and even less Latinx (whatever on God’s green earth that is). To Cuban-Americans, Puerto Ricans, Argentines, and so forth, Cinco is as alien as Bastille Day (you see, Mr. President, the federal bureaucracy created the “Hispanic” panethnicity). If they celebrate it they’ll do so as Americans, not because it is their holiday.

Talk directly, then, to Mexican-Americans, who at 36 million are the whole enchilada (don’t say that). Talk to them as your fellow compatriots, not as members of one of six discrete groups that engage in power-sharing in the country’s racial spoils. That’s what the other side does and we could never beat them at it, nor should we want to. That’s one model you need to break.

So recognize how Mexican-Americans have helped make America great and can make it better under your leadership. Take the fight to their ostensible leaders at ethnic affinity organizations, who are not your friends and never will be (trying to ingratiate themselves has been a fool’s errand for conservatives—that’s another model waiting to be broken).

My dear compatriots, as Mexican-Americans you are heirs to a great culture, one that has influenced the West. One can’t understand Texas or New Mexico without the impact of tejanos and hispanos in those states. But as your president, you’ll be glad to know that I see you as Americans, period; as Americans first and Americans last. You are another great thread in the quilt that is America.

Many of you have been here for many generations, some over 10 or 15, going back to the 1600s. You are as American as apple pie, just like I am as American as Texas chili. Liberals would say that is something called ‘cultural appropriation.’ (Emphasize those words the way you always do to annoy liberals). I call that America, the melting pot, two concepts liberals need some help grasping. You’ve added a lot to our great unifying culture.

You have been very badly mislead by the groups that claim to speak in your name. NALEO, MALDEF, La Raza, and some others have let you down. They have no grassroots, but only links to the wealthy corporations and Washington foundations that created them in the first place, and now keep them afloat, as well as to the government agencies that send them millions in taxpayer dollars. They have a stake in keeping you down, because if you succeed, they’re out of clients.

Their only interest is in making you into victims; I want to make you victors.

Nurturing resentment and victimhood among you has only harmed you, and yet this is what they have been doing since the 1960s. If you don’t believe me, check out what the community organizers that the Ford Foundation sent to the Southwest in 1967 wrote. One of them said that ‘merely implying that the population is the victim of prejudice and discrimination has caused irritation  among many.’ Ford then created MALDEF and La Raza to get this job done.

Spanish-language stations like Univision also need a large captured audience of people without choice. They don’t care if that means you remain alienated from the rest of your fellow Americans, not accessing the same cultural touchstones. And they also need open borders. Jorge Ramos has as much as admitted that open borders is Univision’s business model, as my friends at the MRC Latino have documented. Univision doesn’t care if illegal immigration hurts you more than anyone else, that illegal immigrants bring down your wages and compete for already strained educational dollars.

The truly inclusive approach is the one I preach to you here: You are Americans, among the best, as American as the ‘Dutch’ of Michigan, the ‘Cubans’ of Miami, and the Boston ‘Irish.’

You’re not victims but proud and full of dignity. This is how I and any other president should see you; not as members of a group with which to play the cynical game of identity politics, to be divided and subdivided. You are melted into us and are part of us.

Today you celebrate a hard-won victory in Puebla against a European imperial power, the French. Just like people whose ancestors hailed from Poland, Peru, or Persia will eat corned beef and cabbage, and may even drink green beer, on March 17, you and I and many others across this land—your land—will sit down today to fajitas or carne asada. That’s the melting pot, each contributing his bit.

Thank you for the contributions you have already made and will continue to make. Happy Cinco!