Trump Postponed the Tariffs for Key Trading Partners. Now, He Should Ditch Them for Good. 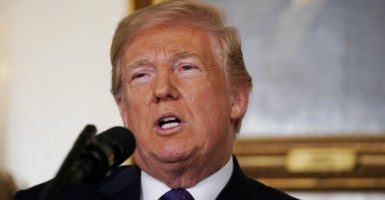 The Trump administration announced late Monday evening that, until June 1, it would continue to exempt Canada, Mexico, and the European Union from tariffs on imports of steel and aluminum.

On June 1, the tariffs are set to go into full effect for any country without a special agreement with the U.S.

Extending the exclusion deadline is a clear admission that President Donald Trump’s tariffs are causing problems for the U.S. economy, and that allowing them to go into full effect would do even more damage.

U.S. allies, such as South Korea, are being forced to accept flawed voluntary-quota deals to artificially prop up American steel and aluminum producers.

Agreements in principle have also been reached with Argentina, Australia, and Brazil on the tariffs, but details have not yet been released.

Japan, a close strategic partner, was once again left out during the process of negotiating which countries would be exempted, despite a visit by Japanese Prime Minister Shinzo Abe just days ago. Taiwan, another close partner, also remains subject to the full tariffs.

House Ways and Means Committee Chairman Kevin Brady, R-Texas, called Trump’s decision to extend the deadline “welcome news,” but the reality is that kicking the tariff can down the road just results in more uncertainty.

Colorado-based Qualtek Manufacturing Inc., a steel and aluminum fabricator for the aerospace and medical industries, is facing that exact uncertainty owing to the tariffs.

Struggles like Qualtek’s are being experienced around the country by companies large and small. Batesville Tool & Die, located in Indiana, says it “may be forced to shift some production to a plant in Mexico,” and other Midwest tool-and-die companies are facing possible layoff situations.

Brady also stated that he is “committed to working with the Administration to ensure that these tariffs are narrow and targeted.”

If the current set of tariffs—which are imposed on all but a handful of countries—are considered “narrow and targeted,” June 1 might feel a lot like a scene out of the movie “Groundhog Day” for the American companies hurt by them. If the Trump administration again kicks the tariff can down the road, it will prolong the uncertainty.

It’s time for Congress to do more than just talk the talk on the steel and aluminum tariffs. American businesses and workers need principled leaders to tell the Trump administration “no.”

Congress should use the power of the purse to prevent the tariffs from being enforced.