Democrats Continue to Delay Nearly Half of Trump Nominees 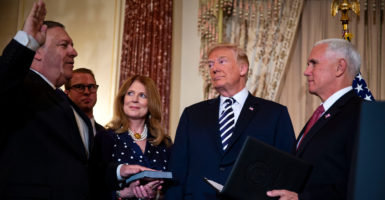 Secretary of State Mike Pompeo had his formal swearing-in ceremony Wednesday at the State Department after a comparatively quick confirmation April 26 by the Senate.

President Donald Trump now hopes for an expedited process to confirm Pompeo’s former deputy, Gina Haspel, to replace him as director of the Central Intelligence Agency.

But 15 months into his presidency, a speedy confirmation vote has been rare, and 40 percent of Trump’s nominees still await Senate action.

At the end of April in his second year in office, Trump had 119 fewer executive branch nominees confirmed by the Senate than the lowest score of the past four presidents, going back to President George H.W. Bush in 1990, according to a fact sheet issued by the White House.

For President Bill Clinton, the Senate had confirmed 80 percent of nominees—or 697—by this point in his first term. For the first President Bush, it was 85 percent, or 567.

Trump has won 459 confirmations, or 60 percent of the nominees he submitted to the Senate.

The first Bush had fewer nominees at this point in his presidency than Trump, sending 671 names to the Senate. But the elder Bush’s presidency followed that of Ronald Reagan, whom he served for eight years as vice president, minimizing some turnover at that mark.

Though Republicans have a slim majority in the Senate, Democrats routinely use a procedural tactic known as cloture to force 30 hours of debate on each Trump nominee.

“Senator Schumer,” the White House asserts in its statement, “is weaponizing cloture.”

The cloture rule requiring 30 hours of debate isn’t reserved for controversial appointments, such as the recently failed nomination of Rear Adm. Ronny Jackson, the White House physician, as secretary of the Department of Veterans Affairs.

So far this year, the Senate unanimously confirmed judicial nominees Rebecca Grady Jennings of Kentucky, Terry Doughty of Louisiana, and Karen Scholer and Walter David Counts III, both of Texas, despite stalling each of them for maximum debate time.

Senate Democrats also extended maximum debate on Jerome H. Powell’s nomination as chairman of the Federal Reserve before the full Senate voted 84-13 to confirm him.

Trump has faced 89 cloture votes, dwarfing what his four predecessors faced. The Republican minority in the Senate used the procedure 11 times against Obama’s nominees during his first term. Clinton dealt with this delay tactic on seven occasions. Both Bushes avoided the problem.

In 2013, when Democrats controlled the Senate, they killed the standard that 60 votes are needed to end a filibuster and proceed to a floor vote on lower court and executive branch nominees. As a result, most of Obama’s nominees could be confirmed by a 51-vote majority.

When Senate Democrats last year tried to block confirmation of Trump’s choice of Neil Gorsuch for the Supreme Court, Republicans did away with the 60-vote standard for all judicial nominees. So, all presidential nominees may advance with 51 votes, rather than a filibuster-proof 60.

Unlike a filibuster, which allows a minority to block a floor vote, cloture uses procedural tactics to prolong the confirmation process so much that it limits the number of nominees who may reach the floor for a simple majority vote.

Schumer’s office did not directly respond to a request for comment from The Daily Signal, but argued that it isn’t a problem caused by Democrats.

Trump also has been slower to nominate executive branch officials than his predecessors. He has not nominated anyone for 209 jobs classified as key administration positions by the Partnership for Public Service, a research group.

Meanwhile, Democrats contend Republican-led Senate committees are slow-walking some Trump nominees and putting holds on others. Democrats also point out that Trump has the highest turnover in his Cabinet in the past century, according to a National Public Radio report.