The Left Is Merciless at Keeping Conservatives in the Closet 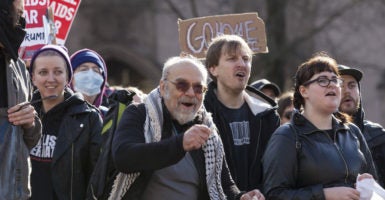 A student-led group protests against a conservative gathering at the University of Washington in Seattle, Feb. 10, 2018. (Photo: Paul Christian Gordon/Zuma Press/Newscom)

The dominant force in America and many other Western countries today is fear of the left.

This is a result of the fact that the most dynamic religion of the past 100 years has been neither Christianity nor Islam. It has been leftism. Whoever does not recognize this does not understand the contemporary world.

Leftism—in its incarnations, such as Marxism, communism, and socialism; expressed through egalitarianism, environmentalism, and feminism; in its denigration of capitalism and Western civilization, especially America and Israel; in its supplanting of Christianity and Judaism; through its influence on Christianity and Judaism; in its celebration of race; and in its replacing of reason with romanticism—has almost completely taken over the news and entertainment media and institutions of education.

There is a largely (though not entirely) nonviolent reign of ideological terror in America. In almost every area of life, people fear antagonizing the left.

Last week, before my speech at the University of Wisconsin-Madison, a man employed by the university (I will not say in what department) walked over to me, looked around to see whether anyone was watching, and whispered in my ear, “I’m a conservative.”

This happens just about everywhere I speak. People whisper—yes, whisper—that they are conservative or they support President Donald Trump. The last time I experienced people looking around to check whether they were seen speaking to me was with dissidents in the Soviet Union.

People call my radio show from all over the country to say that their fellow musicians, nurses, teachers, or employees do not know that they are conservative, let alone that they support the president.

I have called contemporary conservatives in America Marranos, the name given during the 15th-century Spanish Inquisition to Jews who hid their Judaism while appearing to be Catholics, lest they be persecuted. I do not compare the consequences: Losing one’s friends or employment is not the same as losing one’s home or one’s life. But otherwise, the label is apt.

Because of my widely covered conducting of the Santa Monica Symphony Orchestra at the Walt Disney Concert Hall last summer, members of some of the most prestigious orchestras in America have opened up to me, telling me they are conservative but would never reveal this fact to their fellow musicians. They fear either losing their position or, more likely, being socially ostracized.

>>> Can a Conservative Conduct an Orchestra?

Why are so many Democrats shocked when a Republican is elected president? Because, as they themselves say, they “don’t know anyone” who voted for the Republican. The primary reason for this is the people in their life who voted for Trump—professional colleagues, and even friends and relatives—are afraid to tell them.

Parents call my radio show and ask what they should tell their children at college when they ask whether they should risk receiving a lower grade for divulging their conservative politics in a paper or on an exam.

It is becoming more and more common for leftist mobs to gather in front of a conservative’s home, scream epithets at the conservative’s family members, and vandalize the home. Just last week, the Associated Press reported:

Protesters are targeting the northern Virginia home of the National Rifle Association’s top lobbyist … Chris Cox … as well as his wife’s nearby decorating business. … Libby Locke, a lawyer for the Cox family, said the vandalism included spraying fake blood and defacing the home with stickers.

Left-wing student mobs routinely take over the offices of university deans, professors, and even presidents. The few non-left-wing professors on any campus understand their lives will be made miserable if they speak out. The widely reported case of liberal biology professor Bret Weinstein at Evergreen State College in Washington is directly on point.

In May 2017, Weinstein was surrounded by about 50 left-wing students, who screamed curses at him outside of his classroom for refusing to participate in an event during which white people were asked to leave the campus for a day.

To be clear: the police told me I am not safe on campus. They can not protect me. Students in jeopardy. No contact from admin. George?

Within a few months, left-wing students and the left-wing Evergreen administration made life so miserable for the lifelong liberal professor he left the university.

Since the left began spreading the lie that a white police officer in Ferguson, Missouri, shot a black youth because he, like most police officers, is a racist, police officers in many cities have feared taking proactive measures to prevent violent crime in black neighborhoods. They fear the left-wing mob known as the news media will ruin their reputation and end their career.

In the recent case of a Philadelphia Starbucks manager who asked two black men to purchase something before giving them the code to the restroom, Starbucks immediately appeased the left-wing mob. The company didn’t wait until any facts came out; it simply abandoned the manager and announced it would close every U.S. store one day in May to educate all Starbucks employees about “unconscious bias.”

These are only a few examples of the left-wing intimidation that dominates much of American life.

It does so in large measure because liberals are either too afraid to confront the left or they don’t understand that the American left, not the American right, is the mortal enemy of liberalism.