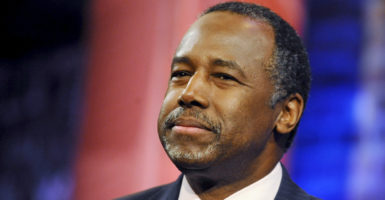 "It really is fairly racist for you to think that a black person has to think a certain way, and that if they don't think that way, there's something wrong with them," says HUD Secretary Ben Carson in an exclusive interview with The Daily Signal. (Photo: Rainier Ehrhardt/Reuters/Newscom)

Housing and Urban Development Secretary Ben Carson spoke to The Daily Signal’s Genevieve Wood about his policy goals at HUD, what it’s like to serve under President Donald Trump, and Kanye West’s recent tweets. An edited transcript of the interview is below.

Genevieve Wood: Secretary Carson, thank you for talking with The Daily Signal.

Wood: So you’ve been in office now a year and a half almost, right?

Wood: Coming up on it. What have been the biggest challenges for you at HUD?

Carson: There have been several challenges, but the biggest challenge is when I first came in there were no assistant secretaries or deputy secretaries, so it was like drinking from a fire hydrant every day.

“I am having a very good time changing the gigantic inefficient bureaucracy to something that actually works.”

But it worked out OK, and we had some tremendous people—career staff and political appointees—who were able to really step up to the plate and help. But that has worked out extremely well.

Probably one of the things that surprised me the most was how disorganized the financial structure was.

Wood: Of the department itself?

Carson: Yes. We haven’t had a CFO for years, and it shows. There are all kind of little silos of accounting with no one really having responsibility. That was ripe for a lot of inefficiencies. We are in the process of fixing all of those things. So that’s a very good thing.

Wood: Because you’ve now been there long enough, you’ve really had a chance to see the landscape and say, “OK, here’s what’s working, here’s what’s not working when it comes to housing policy.” You’ve recently come forward with a pretty bold suggestion that you want to make some changes in terms of how those who receive assistance for public housing, what they have to do to get it. And as you already know, I don’t have to tell you, there are those out there who say you’re going to put people on the streets with your new policies. That you’re going to increase homelessness. How do you react to that?

Carson: I would first of all say nobody’s going to be put on the streets. We’ve gone through the numbers very carefully to make sure that that doesn’t happen. We’ve made sure that rents are not increased for the elderly or the disabled.

“By the year 2048, every dollar the federal government takes in will be used to service the debt. There’ll be no money for any programs.”

We are being realistic as we look at it. We knew what the budget was—with the budgetary constraints that we had to work with—and so we had to make some changes in the rent structure in order to conform with that budget.

Now, there’s a possibility that budget’s going to be plused up if there’s no rescission, which gives us a little more flexibility. So this is really a starting point in the conversation.

Wood: How much of this is about budget and how much of it is about philosophy when it comes to what’s going to help people?

Carson: That’s what I’m coming to. We have to look at sustainability. Every year, millions more dollars are used to support the same number of people. And it’s not sustainable.

“In the past, when people started moving up the ladder of self-sufficiency, we pulled the rug out from underneath them. I don’t want to do that.”

You look at the national debt, $20 trillion. By the year 2048, every dollar the federal government takes in will be used to service the debt. There’ll be no money for any programs.

What we really do is start thinking ahead, but also recognizing that the federal government has been responsible for creating a system that causes people not to necessarily want to work, because if they make more money, their rent goes up, or they may no longer be eligible for their apartment, and this is a nonstarter. So we really need to figure out a way to incentivize people while at the same time providing them with the help that they need in order to move up that ladder.

In the past, when people started moving up the ladder of self-sufficiency, we pulled the rug out from underneath them. I don’t want to do that.

“The swamp does not like to be disturbed,” says @SecretaryCarson

We have to understand that in 30 states you can actually make more money from just sitting back and receiving entitlements than you can from working a minimum-wage job, so it shouldn’t surprise us that a lot of people elect to take the first option.

What they don’t actually understand is that if you take the minimum-wage job, you gain skills, relationships, opportunities that you would not otherwise have had, and in the long run you end up in a much better place. And this is where we really want people to be.

Wood: What are the reforms you want to put in place when it comes from the housing perspective—that you think are actually going to help the people?

Carson: Well, for one thing, instead of assessing their income every year, do it every three years.

Wood: Why is that important?

Carson: That’s important because now they can make money and they won’t have their rent increased. And that’s the thing that keeps a lot of people from really wanting to get a better job. Also, simplifying the process by basing it on gross income rather than on adjusted income.

“In 30 states you can actually make more money from just sitting back and receiving entitlements than you can from working a minimum-wage job.”

Right now, we have a lot of people who have the same basic income, but they pay vastly different amounts of rent because there’s so much play with the system. We want to stabilize that, and that makes it much less expensive because it’s much easier to do.

Those kinds of things really have an impact. Also giving the [Public Housing Authorities] and the owners opportunities to require work or stepped rents or tiered rents, or giving them real flexibility in order to work with people similar to the Moving to Work program.

Wood: Let me ask you this. It all kind of plays into the whole welfare reform question, the larger conversation, is your goal to get more people out of public housing?

Carson: The goal is to get people in a positive economic status. In the past, it’s been how many people can we get in here in this program? Our goal is, how many can we get out of there with a positive outcome?

Wood: I mentioned earlier that you have now been part of the administration for about almost a year and a half. Can you give us some inside skinny? What’s it like to be a member of President Trump’s Cabinet?

Carson: I’ve found it to be very nice. You have a lot of autonomy, but you also have a lot of support for whatever you want to do.

“In the past, it’s been how many people can we get in here in this program? Our goal is, how many can we get out of there with a positive outcome?”

I am having a very good time changing the gigantic inefficient bureaucracy to something that actually works. And that’s important to be able to do, fully recognizing that the swamp does not like to be disturbed, and that you’ll be the subject of much attack, but the proof will be in the pudding.

Will we be able to get a large-scale mentorship program going across the country so that we can give a lot of these disadvantaged young people an opportunity to see what the rest of the world is like? Expose them to help them along the way.

Wood: And these are ideas you’re bringing to the table. Do you find the president responsive?

Carson: Very. Very responsive. He’s been quite enthusiastic about all the things because he wants to see a difference.

He railed during the campaign about what was going on, particularly in the inner cities. People were making no progress, they were actually going backward. He said we can do better than that. And we can.

Wood: Final question for you. There’s been a lot of talk back and forth about Kanye West and coming out as supporting the president, or at least saying people should have the ability to say what they want to say about things. What do you think about this recent political discussion?

Carson: I was pleased to see Kanye West come out and talk about that. I’ve had an opportunity to have conversation with him in the past, and he actually is a very thoughtful person.

“It really is fairly racist for you to think that a black person has to think a certain way, and that if they don’t think that way, there’s something wrong with them.”

What our country doesn’t realize, and particularly what a lot of liberals don’t realize, is that it really is fairly racist for you to think that a black person has to think a certain way, and that if they don’t think that way, there’s something wrong with them and start calling them names and persecuting them. That is just as racist as anything that I can imagine.

Wood: So you think it’s a good thing we are opening up the discussion.

Carson: It needs to be opened up, and a lot of people have a herd mentality, “Well this is what everybody does, and that’s what I’m going to do,” without really thinking about what has this group done to really help me, to increase my opportunities?

You tend to think long and hard before you can come up with something. And maybe it’s time to make people compete for my loyalty, and compete for my vote, and maybe I’ll do a lot better. And I think a lot of people are starting to understand that now.

Wood: Secretary Ben Carson, thank you for talking with us.

Carson: My pleasure, thank you.