Democrats’ Universal Job Plan Would Be a Socialist Disaster 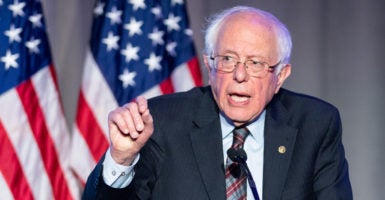 Sen. Bernie Sanders is set to announce a plan that guarantees every American “who wants or needs one” a lifetime government job paying at least $15 an hour, with health insurance and other perks.

This new progressive workforce will then, according to The Washington Post, build glorious “projects throughout the United States aimed at addressing priorities such as infrastructure, care giving, the environment, education and other goals.”

It would be one thing if the nation’s leading socialist—and perhaps the most popular Democrat in the country—were the only one interested in creating a state-run workforce to “compete” with the private sector. A number of other allegedly moderate Democrats and prospective presidential candidates, including Sens. Kirsten Gillibrand and Cory Booker, favor a universal job guarantee as well. It’s rapidly becoming a mainstream idea.

One imagines that a quixotic proposal like this polls quite well. I mean, who doesn’t want everyone to have a job?

You don’t possess a skill set that enables you to find productive work? You don’t want to learn a new trade? You don’t want to obtain a better education? You have no interest in moving to an area where your work might be in demand? You don’t want to start your career with a lower wage even if the long-term prospects of doing so might be worthwhile? Don’t worry. The government’s got an incentive-destroying job opportunity just for you.

And if you’ve been fired for a poor work ethic, or for stealing, or for making women uncomfortable with your creepy behavior, fear not; Bernie’s got your back.

“Job guarantee advocates,” The Washington Post says, make the absurd claim that Sanders’ plan “would drive up wages by significantly increasing competition for workers, ensuring that corporations have to offer more generous salaries and benefits if they want to keep their employees from working for the government.”

Corporations are concerned with profit. If the minimum wage kills jobs, why should we believe businesses (especially smaller ones) would compete with government-funded projects that can print money and create salaries (and benefits) that are wholly untethered from the real cost of labor? Businesses would simply hire fewer Americans—especially those Americans first getting into the labor force.

Of course, it’s more likely that our state-run workforce would be deployed for ideological and political priorities rather than economic ones. If history is any indicator, it would be used to prop up politically useful projects and keep failing industries afloat, undermining creative destruction, innovation, and long-term growth.

You do have to wonder, what would happen if local communities that share President Donald Trump’s “priorities” were to demand utilizing this state labor? What if they were to want to build sections of a wall on the southern border rather than make solar panels, or whatever progressive priority Sanders has in mind? We’d be hearing about a rise of fascism in no time.

Then there is the mission creep. No doubt the Washington, D.C., bureaucracy that would emerge to run this project would be both nimble and competent. But why only $15? Who can live on $15 an hour? Well, not a lot of people. Surely, these hardworking public servants who keep the infrastructure from crumbling around us deserve a genuine living wage. How about better pensions? As this workforce grows, it wouldn’t possess any special ability other than being able to corral huge numbers of people to demand more.

Most of all, making government responsible for every American’s job prospects would change the dynamics of governance—forever. Not only would politicians be expected to help create the economic conditions that make growth possible; they would then face another unrealistic expectation. Unemployment would no longer be a function of economic conditions but rather heartless politicians who fail to create jobs for voters.

This is exactly what left-leaning economists who obsess about inequality and push zero-sum fantasies about wealth and growth want. It’s why they wanted the federal government to control the structure of the health care system, and it’s why they want to create a “public” job option. Most of them openly argue the universal job program would let them control wages and benefits in the private sector.

Democrats have yet to tell us how they plan to fund this massive workforce idea that doesn’t generate any profit. I have a strong suspicion it will have something to do with the nefariously wealthy not paying their fair share. I’m not sure, however, that even the Koch brothers could afford to bankroll this idea. But it’s not really meant to pass. Not yet. Republicans would never go for it, after all.

Democrats see this as a promising campaign issue. In the meantime, they continue to normalize destructive socialistic ideas in political discourse.