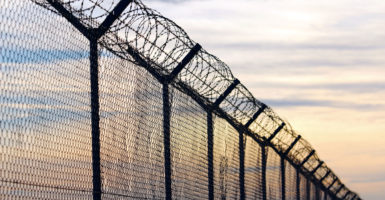 About half of released prisoners are re-arrested within three years of their release. (Photo: kodda/Getty Images)

Debate in Congress about criminal justice reform has come to focus on one issue: Our federal prison system could be doing more to protect public safety and to invest tax dollars more wisely so that our prisons function less like revolving doors.

The House Judiciary Committee was scheduled Wednesday to consider a bill, the Prison Reform and Redemption Act of 2017 (H.R. 3356), which addresses that issue head-on, but that hearing was postponed till the week of May 7.

The federal prison system currently houses more than 180,000 individuals. Each year, about 40,000 of those individuals are released back into their communities, and within three years, about half of them are re-arrested.

Conservative states, including Texas and Georgia, in response to public safety and spending concerns at the state level, have already proven that prison reform can reduce recidivism, help prisoners succeed after their release as law-abiding members of their community, and even save taxpayers money.

In light of President Donald Trump’s support for proven state policy solutions, prison reform has now leapt to the front of criminal justice proposals being considered in Congress.

In his first State of the Union address, the president spoke pointedly about the need to reform our prisons. While urging investment in workforce development and job training, Trump also said:

As America regains its strength, opportunity must be extended to all citizens. That is why, this year, we will embark on reforming our prisons to help former inmates who have served their time get a second chance at life.

That is the overarching goal of the Prison Reform and Redemption Act of 2017, introduced by Reps. Doug Collins, R-Ga., and Hakeem Jeffries, D-N.Y.

The bill would enhance public safety by directing the Bureau of Prisons to increase the availability of productive activities and programs in federal prisons that have been shown to reduce recidivism—while consistently monitoring and improving them.

The bill would require the attorney general to focus on giving prisoners more access to the programs that have proven most effectively to reduce recidivism at both the state and federal levels.

It would also direct the attorney general to develop an assessment tool to identify the unique risks and needs prisoners face after sentencing. This tool would need to be scientifically sound and statistically valid, incorporating both static factors (things that cannot be changed) such as criminal history, and dynamic factors (things that can be changed) such as anti-social impulses and values.

The bill would require all offenders to undergo an initial risk and needs assessment as a part of the prison-intake process to determine whether they present a low, moderate, or high risk of re-offending, and to undergo at least annual reassessments of their recidivism risk.

The bill would also provide incentives for eligible offenders to participate in and successfully complete productive activities and programs, based on their own individual needs and the likelihood that they will re-offend once released from prison.

Those incentives would include receiving as much as 15 days of earned-time credit for every 30 days of successfully participating in a program. This would allow offenders to spend up to 25 percent of their sentence in some form of community supervision or home confinement.

Other rewards for successful participation in programs include increased time to talk with and visit family members, mentors, and religious leaders.

Prisoners who violate prison rules or programming requirements would be subject to a number of penalties, such as having their time credits revoked.

In addition, prisoners who have been convicted of certain offenses listed in the bill—such as terrorism, torture, sexual abuse of a minor, and three or more drug-trafficking offenses—would be ineligible for time credits.

Under the bill, all of these prison program expansions would be phased in over a period of five years, with the ultimate goal of making them available to all eligible prisoners.

To accomplish this, the bill would direct federal prison wardens to partner with nonprofits and private organizations—including faith-based and community groups—to provide the required programming, such as vocational training, religious mentorship, and even employment opportunities.

Congress deserves kudos for continuing to look at ways to improve outcomes—not just focus on intentions—for the federal prison system. Those kudos are due especially for its efforts to bring in private and nonprofit groups to deliver meaningful change, person-to-person, with the singular goal of reducing crime and strengthening American communities.

As Mark Holden, general counsel of Koch Industries, recently said, the president also deserves kudos for addressing “expectations around prisons, which are failing to equip individuals to successfully return to society and succeed.”

Now, Congress and the Trump administration can work hand-in-hand to ensure that more prisoners are spending more significant parts of their sentences preparing to re-enter society as law-abiding contributors to their communities.

By incorporating the lessons of successful reforms in conservative states, as well as federal policies that effectively reduce recidivism, the Prison Reform and Redemption Act of 2017 represents a positive step toward increasing public safety and improving investment in the federal prison system.

The provisions of the bill merit open-minded debate in Congress.