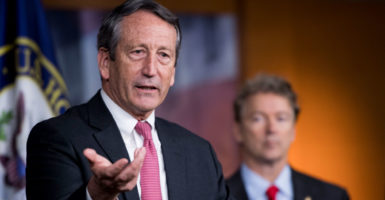 Sen. Rand Paul, R-Ky., and Rep. Mark Sanford, R-S.C., recently revived the “penny plan,” which calls on Congress to reduce spending by at least one penny on the dollar from one year to the next.

The proposal was introduced in 2011 by then-Rep. Connie Mack, R-Fla., and Sen. Mike Enzi, R-Wyo., and has been introduced several times since then.

The Paul and Sanford proposals highlight an issue that is becoming more severe every year. Yet, there’s more to the story.

The penny plan is appealing for a few reasons.

While budget discussions in Washington can be very complex and hard to follow for most people, the penny plan is easy to understand. It would simply reduce spending by 1 percent.

Just about any American can support the idea that the federal budget can probably make do with 1 percent less in spending. The plan’s simplicity hides the actual spending reductions required to make it work.

It appears to work.

The penny plan leaves it up to the respective congressional committees to identify the reforms and savings that would be necessary to remain within the plan’s spending limitations.

That’s where the plan most likely becomes unworkable, requiring steep reductions in the projected growth in spending in specific programs that enjoy popular support.

Putting forth a concrete plan to balance the federal budget requires decisive and tough decisions to reduce spending, including in those areas that enjoy wide support.

As Social Security and federal health care programs consume more than half of the federal budget and make up the fastest-growing federal programs, achieving balance without massive tax hikes will require major entitlement reform.

It is much easier to support the idea in principle of balancing the budget without tax increases than embracing the actual policy reforms that would be necessary to accomplish such a feat.

Now for the hard part.

The Congressional Budget Office projects federal spending to grow by $329 billion from fiscal 2018 (the current fiscal year) to fiscal 2019. The penny plan would require an almost $400 billion reduction in spending for fiscal year 2019 by freezing spending at the fiscal year 2018 level and deducting 1  percent more.

Federal spending is projected to grow by approximately $3 trillion over 10 years, for an average annual spending increase of about $300 billion. Since the benefits of the penny plan would be cumulative, beginning with a spending freeze in 2019, the actual spending reduction would total far more than $10 trillion.

Sanford projects reaching balance by 2024 and limiting spending to a revenue cap afterwards. In the latter plan, the projected fiscal path would be enforced with an automatic sequestration that—unlike the Budget Control Act, which capped only discretionary spending—would put all programs on the table for cuts.

Congress is highly unlikely to sustain such large spending reductions.

While the penny plan is impractical, Paul and Sanford raise an important issue—namely, that most of the federal government’s fiscal problem results from the automatic growth in spending.

That’s in large part a result of rising costs of health care, as well as the increase in the population eligible for old-age benefits and the aging of American society.

As The Heritage Foundation’s Paul Winfree explains, “The federal budget is unsustainable. This unsustainability is driven by 2 percent of all spending accounts—primarily public health care programs administered by the Department of Health and Human Services and benefit payments for Social Security’s Old Age and Survivors Insurance Trust Fund.”

More lawmakers should look the facts in the eye. There is no silver bullet that will help lawmakers avoid specific and decisive action to structurally reform the key drivers of federal spending growth.

The longer lawmakers wait, the tougher reform will be as spending is growing at a rapid pace, and achieving balance is becoming more difficult every year. Proposals like the penny plan make that inevitably clear.