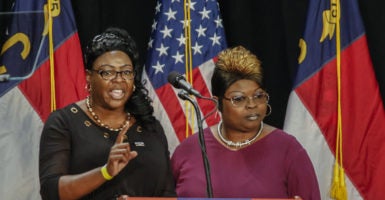 Lynnette Hardaway (left) and Rochelle Richardson, who run their conservative Facebook page, “Diamond And Silk,” said on Fox News on April 9 that their videos were deemed “unsafe to the community” by the social network. (Photo: Nell Redmond//UPI/Newscom)

Conservative social media personalities Diamond and Silk, who say Facebook has censored their page, were front and center at a congressional hearing Thursday on the content-filtering practices of social media platforms.

“Shame on the ones that don’t even see that we have been censored, yet when the Black Lives Matter people complain about it—oh, everybody is up in arms,” Lynnette “Diamond” Hardaway said Thursday at a House Judiciary Committee hearing.

Hardaway appears regularly in videos on social media with her real-life sister, Rochelle “Silk” Richardson, as Diamond and Silk.

“Let me just say this here: If the shoe was on the other foot, and Mark Zuckerberg was a conservative, and we were liberals—oh, fences and chains would have broke loose,” Hardaway said of the Facebook CEO. “You know it, and I know it.”

Twitter declined The Daily Signal’s request for comment, but Facebook said that it’s standing by remarks made by Zuckerberg, when he testified April 10 and 11 on Capitol Hill about the company’s practices.

“As Mark stated during his testimony in front of Congress, ‘I’m very committed to making sure that Facebook is a platform for all ideas,’” a Facebook spokesperson told The Daily Signal in an email, adding:

That’s a very important founding principle of what we do. We’re proud of the discourse and the different ideas that people can share on the service, and that is something that as long as I’m running the company, I’m going to be committed to making sure is the case.

On April 9, Hardaway and Richardson said on Fox News that their videos had been called “unsafe to the community” by Facebook.

Representatives from Google and Twitter, as well as Facebook, were invited to the hearing and to testify, but did not attend.

“Facebook, Google, and Twitter, in many cases, would like to appear as neutral channels,” House Judiciary Chairman Bob Goodlatte, R-Va., said in prepared remarks as the hearing opened.

“YouTube, a subsidiary of Google, for example, states that its purpose is ‘to give everyone a voice and show them the world,’” Goodlatte said. “But this goal, and those of the others, appear wildly aspirational, and do not reflect the true nature of the business that these for-profit companies engage in.”

The following are six of the most interesting exchanges from the hearing:

“Even down to the president of the United States is being censored as well, with him having over 23 million people on his platform, unable to garner a million views on a video within an hour,” Richardson said. “Before the censoring, he was able to do that. Now, he can’t do that. So yeah, there is a lot of conservative voices that are being censored.”

“Facebook says in their ruling, that if you like and follow our page, that  you are supposed to receive a notification whenever we drop content,” she said. “What is the purpose of them following and liking the page … for Facebook and Mark Zuckerberg to think that they can dictate to people and tell people what they can and cannot see in their news feed? I thought this was a platform for all ideas.”

3. Push Back on Claims of Being Funded by Trump Campaign

Richardson and Hardaway were questioned by Reps. Sheila Jackson Lee, D-Texas, and Hakeem Jeffries, D-N.Y., about a May 2017 Trump campaign finance report filed with the Federal Election Commission that said the campaign paid Hardaway and Richardson $1,274.94 on Nov. 22, 2016, for “field consulting.”

“There may have been a mistake from the Trump campaign whenever they wrote what the $1,274.94 was for,” Richardson said.

“We were asked to join the Women for Trump tour back in 2016, and Miss Lara Trump asked that our airline tickets be refunded back to us because we paid for those tickets when we went from New York to Ohio.”

4. Twitter’s Disparity of Representation Among Administrators

Rep. Lamar Smith, R-Texas, said at the hearing that research has shown Twitter in its administration favors liberal viewpoints over those of conservatives.

“The Media Research Center found that liberal Twitter advisers outnumbered conservatives 12 to 1,” Smith said. “Twelve U.S. members of Twitter Trust and Safety Council, which help guide its policies, are liberal, and only one is conservative.”

Hardaway said that since Facebook itself says it’s “a platform for all ideas,” some ideas should not be given preferential treatment over others.

“I don’t care if you are on the left or the right. The deal is that no voices should be silenced, and you should not be discriminating,” she said. “If it’s a platform to express ideas, express all ideas, not just one side.”

Diamond and Silk, who are black, also pushed back on comments from Jeffries, the New York lawmaker, for earning money with their platform at Trump’s reported suggestion.

“[Trump] urged us to monetize our platform,” Hardaway told Jeffries. “You, as an African-American, are not going to make us feel guilty, because we are going to get out here and take advantage of these platforms and monetize, just like everybody else does. I don’t see you walking up to a white person and say, ‘Oh, you shouldn’t be monetizing.’”