Parents Stand Up for Children in ‘Sex Ed Sit Out’ 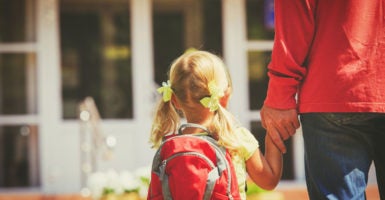 Parents across the country pulled their children out of public schools on Monday for the “Sex Ed Sit Out”—a grassroots awakening of frustrated parents who are sick of the sexualization of children in their taxpayer-funded schools.

The Sex Ed Sit Out was conceived by Elizabeth Johnston, who blogs at Activist Mommy, and other moms on social media who are concerned about the increasingly graphic, unscientific nature of sex education in public schools.

Parents protested in cities across the United States, as well as in England, Canada, and Australia.

In solidarity with the event, parents in Northern Virginia held a conference on Saturday on the radical changes in sex education and how schools deliberately deceive parents.

A common note struck at the conference was the anti-science approach of the Fairfax County sex ed curriculum. Students are taught that they weren’t really born male or female—rather, a sex was assigned to them at birth by a delivery room doctor who might have gotten it wrong.

In fact, sex ed curriculum advisers recently announced that “biological sex is essentially meaningless,” and the phrase is being scrubbed from all lessons and replaced by the phrase “sex assigned at birth.” It’s a little sexual-revolutionary agitprop to keep the youngsters off balance.

Parents discussed how “transgender identity” is now presented in schools as a healthy alternative for children, but the risks of surgical and hormonal “sex transition” are not mentioned—such as the serious risks of untested, experimental puberty blockers and cross-sex hormones for children, or side effects like stunted growth and ruined reproductive systems.

Informing children about medical risks was voted down by the school board advisers.

>>> Horrific Sex Ed Curriculum Is Taking Over in This Virginia County, and Objectors Are Getting Steamrolled

Several parents discussed how they are sick of being played for fools in Fairfax. The eighth-grade lesson called “abstinence” is a scam. It doesn’t teach children abstinence until marriage, but abstinence “until a person is in a faithful, monogamous relationship.”

In fact, the word “marriage” doesn’t even appear in the actual lesson—not even once.

In the more than 80 hours of sex ed that kids are subjected to during their public school career, children are asked to become experts on every contraceptive drug and device imaginable, and yet no time is spent on how to form healthy marriages and happy families.

In fact, the only lesson that focuses on fathers is a ninth-grade lesson on sexual assault, where students are shown a video about a father who repeatedly rapes his terrified daughter. It’s a disgrace.

Fairfax schools now teach the use of a daily drug regimen known as pre-exposure prophylaxis, or PrEP. PrEP is a drug that promises reduced risk of HIV/AIDS to gay men who have condom-free sex.

LGBT advocates have called PrEP a “catastrophe” that will lead to risky behavior, and today the rates of HIV infection are skyrocketing. Yet PrEP is pushed on kids every year from ninth grade on—even though the Food and Drug Administration has not approved its use for those under the age of 18.

A highlight of the Saturday conference was the appearance of Judith Reisman, an internationally acclaimed researcher and author on the ideologically driven origins of the modern sex ed movement. Reisman detailed the child abuse and fraud at the core of Alfred Kinsey’s research, and how the Kinsey model has corrupted classroom education on human sexuality. (Kinsey was an early sexologist who had a lasting influence on sex education.)

We are light years away from bird-and-bees biology. We are now into the age of recruitment. And it’s parents’ tax dollars that are used to fund the recruitment of their children into the sexual revolution—a revolution that has destroyed more lives than any other in human history, if you consider deaths from diseases such as HIV/AIDS and the tens of millions of children lost to abortion.

And more silence from parents and the church.

But parents will be silent no more. They are sick of sex ed lessons for children that sicken their bodies and burden their souls.