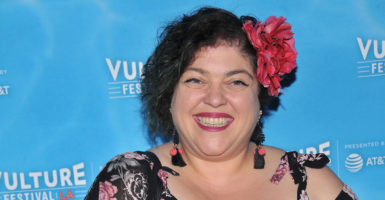 California State University, Fresno closed its investigation Tuesday into the professor who called former first lady Barbara Bush an “amazing racist” and said she is “happy the witch is dead.”

Fresno State President Joseph I. Castro asserted that English professor Randa Jarrar did not violate any of the school’s policies with her remarks, reported the Foundation for Individual Rights in Education, also known as FIRE.

“Professor Jarrar’s conduct was insensitive, inappropriate, and an embarrassment to the university,” the university president noted, but went on to state the professor’s conduct “did not violate any CSU or university policies and that she was acting in a private capacity and speaking about a public matter on her personal Twitter account.”

“Professor Jarrar will remain on leave through the Spring semester, which she had previously requested before this incident,” continued Castro.

He did not address comments in which Jarrar tacitly endorsed hijacking planes and throwing grenades into the houses of political opponents, as can be seen in a video.

The Daily Caller News Foundation reached out to Fresno State about these remarks but did not receive a response in time for publication.

“Americans may face a variety of social consequences for making political statements that others find offensive or upsetting,” Ari Cohn, director of FIRE’s Individual Rights Defense Program, said. “But official punishment by an agency of the government like Fresno State is not, and must not become, one of those consequences, regardless of the views being expressed.”