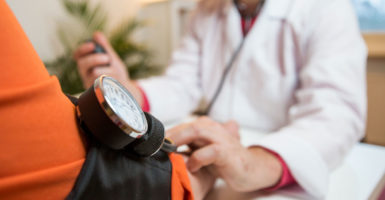 With the collapse of choice and competition in the Obamacare health insurance exchanges, combined with major premium and deductible increases, “progressives” in Congress are looking for new ways to expand the role of government in Americans’ health care.

Progressives’ current thinking: Use Medicare to entice millions into a government-controlled health system. By relying on even more extensive government control to fix the problems created by an excess of inflexible government regulation, the outcome would be no surprise. More of the same: fewer choices, higher costs—and an expedited route to the final death of private health plans.

Under the bill, Medicare Part E plans would be defined as “qualified health plans’” under the terms and conditions of Obamacare. They would provide all benefits and services required under Obamacare, plus benefits required under traditional Medicare.

In other words, it would reverse current law, which has enabled almost half of all states to “opt out” of health plan coverage of abortion in the health insurance exchanges.

The federal government—through the secretary of health and human services—would set the new plans’ premiums, as well as payment rates for doctors, hospitals, and other medical professionals based on Medicare payment rates.

Securing the objective of government monopoly in the Obama-battered individual markets should not be too difficult, since 52 percent of U.S. counties now have only one insurer anyway.

Medicare payment rates for doctors and other medical professionals are routinely lower—often much lower—than health plan rates in the private market. The bill thus includes a pre-emptive cure for any potential lack of enthusiasm among doctors who might not wish to participate.

In other words, Medicare doctors would automatically participate in this government-run health plan whether they like it or not.

Unlike most private insurers, the new Medicare plans would have the full backing of the federal government, meaning the taxpayers would assume the financial risks and be saddled with covering any program losses.

Because the bill does not establish any separate Medicare Part E trust fund, the new program presumably would be integrated financially into the Medicare program itself. As a political matter, Medicare Part E plans would become too big to fail.

As noted, Medicare pays relatively low rates to doctors and hospitals, but the program is not cheap. As the Congressional Budget Office has warned repeatedly, Medicare spending is generating major deficits and debt. As of 2016, Medicare accumulated huge long-term unfunded obligations, ranging between $32 and $44 trillion, depending upon the assumptions. The Senate bill would doubtless add to those large and growing taxpayer obligations.

In the “Medicare for All” bill (S. 1804), introduced last year, Sen. Bernie Sanders, I-Vt., and leading Senate “progressives” called for the outright abolition of all employer-sponsored health insurance. This would be a politically unpopular proposal.

The obvious logic: If the taxpayers are going to pick up the tab for employee health coverage, why should employers continue to offer and finance health insurance? Companies would, understandably, better their bottom line by dumping workers and their families out of their existing coverage and into the government program.

For employers, the temptation could be irresistible. Under the bill, the statutory cap on income eligibility for the generous Obamacare subsidies would increase from 400 percent of the federal poverty level to 600 percent—in today’s dollars, $72,840 for a single person and $150,600 for a family of four.

Make no mistake, the purpose of this bill is not to enhance your choices or competition among health plans, it is to destroy both. It is not to promote a diversity of health plan options, it is to secure government-enforced uniformity. If you don’t like what you get, that’s tough.

Progressives want a bureaucratic edifice of coercion and control in your health care. Their tacit assumption: They know better than you what is best for you. You’ll just have to learn to like it.