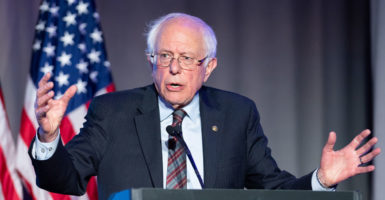 Sen. Bernie Sanders, I-Vt., has no estimate of how much his forthcoming jobs plan would cost. (Photo: Michael Brochstein/Sipa USA/Newscom)

Sen. Bernie Sanders’ big-idea solution to everything is big government.

The independent senator from Vermont wants government-run, single-payer health care. Seeing efficiencies that nobody else can see, he wants to turn post offices into banks.

Now, he wants to leverage the notoriously inept federal job-training system (see here, here, here, etc.) and a new set of regional bureaucracies to guarantee everybody a job.

In addition to not actually working, the program would require gobs of money. Of course, that is no problem for Sanders so long as at least one solvent corporation or rich person remains in America. We will tax them to pay for whatever is the big-spending plan of the day.

In this worldview, the economy is a big pile of money that simply needs to be distributed fairly. Incentives matter little. Tax cuts are thievery and not a means of stimulating job-creating investment.

However, reality is different. Incentives do matter, just as we have seen in the past year. The tax cuts passed in December have already led to pay raises, bonuses, and (more importantly) increased investment. It is this increased investment that will lead to continuing raises and bonuses.

The rhetoric of big-government jobs programs originated in the Great Depression, a time when the unemployment rate was 25 percent. But today’s unemployment rate is barely above 4 percent—a level widely viewed as representing full employment.

Of course, there are still people who want to work and can’t find a job—but the big picture is backward from what most people think. The problem is not so much with job availability as with finding workers who can show up and pass a drug test.

The issue is not just with marijuana. Seventy percent of firms in one survey blamed opioids for problems with absenteeism, reduced productivity, and safety issues. The track record of federal jobs programs gives little hope that yet another expensive jobs bill will solve what is more a mental health problem than a job shortage.

Wages grow when productivity grows. Stimulating investment, as the recent tax cuts are doing, will increase productivity. Bloated, costly, ineffective federal jobs programs will not. Pretending otherwise may stir up the crowds at rallies of the uninformed, but it won’t get them good jobs.