If Current Laws Had Been Followed, There Would Have Been No Waffle House Shooting 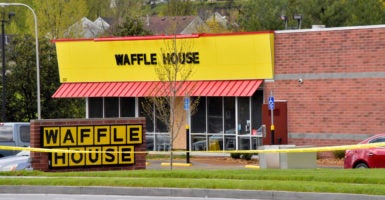 Police tape surrounds the Waffle House in Nashville, Tennessee, where a shooter killed four individuals before being stopped by a bystander. (Photo: Jim Brown/Image of Sport/Newscom)

On Monday afternoon, Tennessee law enforcement officers captured a 29-year-old Illinois man suspected of opening fire on diners at a Nashville Waffle House, despite the man having had his firearms seized on multiple occasions in the last two years.

Four people died and several others were wounded by the shooter—who wore nothing but a green jacket—before a  customer, also 29, heroically wrestled the firearm away and threw it over a counter. The attacker fled the scene naked and evaded police for over 24 hours before the suspect was apprehended.

As often happens in the aftermath of highly publicized shooting incidents, blame has already been placed on the lack of “common-sense gun control.” But, once again, this blame is misplaced—had already-existing laws been properly followed and enforced, this individual would not have had access to a firearm.

What We Know About the Suspect

The Waffle House suspect has a long history of mental health issues, including recent run-ins with law enforcement and an observational stay in a psychiatric unit. The timeline of concerning events, as most recently reported by major media outlets, is outlined below:

The accused man’s father told police that he had previously taken three rifles and a handgun away from his son and locked them up over concerns regarding his mental health. The father returned the firearms to his son because the father wanted to move out of state.

Officers told the father that he should consider locking up the firearms again until the suspect received mental health treatment, and the father said he would.

On Aug. 24, deputies arrived to seize the suspect’s firearms and remove them from his possession. His father, who had a valid state firearms license, requested that the firearms be released to him under the condition that they be kept secured and inaccessible to his son.  Because the father could legally possess firearms in the state and agreed to comply with requirements to keep them away from the suspect, officers agreed to transfer them to the father.

Can the Father Be Held Criminally Liable?

It’s possible that the father can be held criminally liable for returning the firearms to his son, depending on the specific circumstances of when and where he returned them, and which state laws are being considered.

In Illinois, it’s a class 4 felony to knowingly transfer a firearm to an individual who doesn’t possess a valid state firearms license. It’s apparent that the father knew that his son had this license revoked, because he was both present when officers came to seize the firearms and was told by the officers that the firearms must be kept inaccessible to the son. If the father gave the firearms back to his son before he left Illinois, this statute could come into play for criminal charges.

If the transfer occurred in Tennessee, however, this may not be the case. The Waffle House suspect doesn’t appear to have been prohibited from possessing firearms under Tennessee law, because he was never convicted of a disqualifying criminal offense or involuntarily committed to a mental institution.

There are other possibilities for criminal charges in Tennessee, such as for reckless or criminally negligent homicide, but the availability of those charges may depend on how Tennessee interprets those laws.

Like the vast majority of mass public shooters with mental health problems, the man in custody  appears to have inexplicably managed to avoid a criminal or mental health history that would have disqualified him from possessing a firearm under federal law.

This incident certainly raises concerns about records-sharing between states. Illinois revoked the suspect’s state firearms license, meaning he was prohibited from possessing a firearm in the state of Illinois.

This doesn’t, however, mean that other states like Tennessee had access to any information indicating that the suspect presented a heightened risk of danger such that he needed to remain disarmed.

Moreover, millions of relevant disqualifying histories are likely missing from the FBI’s background check system because states can’t be compelled to submit them, and too often fail to do so.

But realistically, even perfect records-sharing would only have prevented the Waffle House suspect from purchasing new firearms—which requires a background check—or from receiving firearms from a private citizen who follows the law and doesn’t transfer firearms to dangerous or disqualified individuals. It would not have prevented the accused man’s father from recklessly, and perhaps illegally, giving the guns back to his son without informing police.

Meanwhile, Monday afternoon in Toronto, nine people were killed and another 16 were wounded in a deliberate mass public attack. The deadly weapon was not an AR-15, or a handgun with a “high-capacity magazine.” That attacker needed only a van to cause double the carnage seen in Nashville.

Laws have the power to disarm law-abiding citizens who would obey those laws. They have no power to prevent an irresponsible parent from re-arming his son with the very guns he agreed to keep inaccessible, and from failing to inform law enforcement that an individual proven to be a danger to himself or others now has firearms.

Once again, we were not failed by a lack of adequate gun laws. We were failed by human error that neglected to fully enforce those laws.