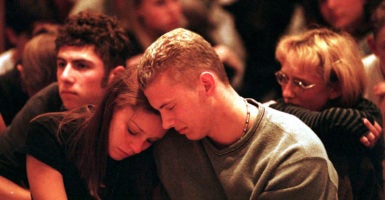 It’s one of those moments that life sears into our memory. Nineteen years ago today, Americans turned on the news. And we saw it: the harrowing footage of students running out of Columbine High School.

I learned later the Columbine attackers tried to prevent those students from leaving. They planted a powerful bomb in the school cafeteria and set it to go off when the room would be full of kids. The bomb didn’t explode, thank God, but if it had, police say hundreds would have died.

As it was, the attackers took 13 precious lives, injured 24 other students and teachers, and left a scar in our nation’s soul that remains with us still.

While I was just a viewer of this tragedy, Evan Todd was one of the victims. He was the first student shot in the school library and recently shared his story in a powerful Daily Signal interview.

Watching it, here’s what really got me: Despite the passage of 19 years, Evan told us he feels like the attack happened just yesterday.

“They came into the library and stood at the door,” Evan recounts. “I was the only one standing up at the time, behind a pillar. That’s when they saw me move and they lowered their shotgun and fired and that’s when I was hit.”

“They went around shooting at random, asking students questions,” he continued. “After a while, they came back around to where I was at and put guns to my head and asked, ‘Why shouldn’t we kill you?’ I told them, ‘I’ve been good to you and everyone in the school, and you know it.’ Their facial expressions changed, and they lowered their guns.”

Although Evan’s life was spared, it was changed forever. “It’s 19 years later,” he told us, “and it still affects [my] daily life.”

Evan’s wounds have healed, but his pain continues. So many other people are hurting today, too. The grieving families of the 13 who lost their lives that day. The injured like Evan. The students who escaped physically unharmed but emotionally shaken. And the millions of Americans who saw the horrific images and prayed they’d never be repeated.

I’m one of those millions and, like so many Americans, I worry about this issue in a very personal way.

My children are grown, but my grandchildren aren’t. Making sure school is a safe place for them, and for every student, matters to me—a lot. So when Evan told us, “Our first, No. 1 priority is to actually physically protect the children,” I couldn’t have agreed more.

That’s why we owe it to the victims and survivors of school attacks to get serious about school safety. Schools should be centers of learning, not fear. They should be places where parents know their loved ones are safe, not dread the news or an emergency phone call. And they should be no less secure than the thousands of other public spaces and buildings that serve our citizens.

That’s why this solemn anniversary needs to be a day for both mourning and commitment. Nothing can bring back the lives and innocence lost 19 years ago, but we can—and must—resolve to take the action that has yet to be completed.

The Heritage Foundation has made that commitment, and we’ve developed policies that can make our students and schools safer. (You can access our School Safety Initiative by clicking here.)

In place of political slogans, we’ve focused on powerful solutions. Because making sure there will be no more Columbines or Sandy Hooks or Parklands means taking real action.

Getting serious about school safety starts with listening to brave people like Evan and focusing on the problems he and others are urging us to solve. That means taking real action on the many warning signs of danger that tend to come to light only after an attack has occurred. It means recognizing and proactively treating mental illness, which has afflicted so many of those involved in mass public attacks.

It also means putting an end to bullying, which the Secret Service says was a factor in two-thirds of America’s premeditated school attacks. It means taking concrete steps to secure our schools and improve law enforcement. And it means taking a hard look at the crises in our culture—including media violence, broken families, and the absence of faith—that are present in so many of these attacks.

I know these are hard steps to take. But I think we dishonor the memory of Columbine if we don’t take them.

Let’s not let another 19 years—or even another 19 days—go by without getting serious about school safety.

Survivors like Evan and the children of today deserve nothing less.