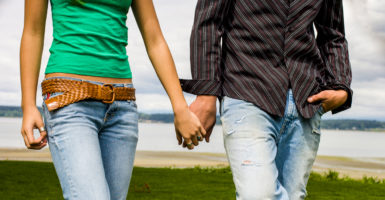 A Boston College philosophy professor says few of her students have ever gone on a first date, so she gives extra credit to those who do. (Photo: Jed Share/Kaoru Share Blend Images/Newscom)

A Boston College philosophy professor—dubbed the “dating professor” for offering extra credit for students who go on first dates—says that dating has become “a weirdly countercultural thing to do.”

In Kerry Cronin’s class, the unconventional assignment used to be mandatory, but now is offered for extra credit, because students would ask someone on a date, but often didn’t follow through.

“I realized at that point that the social script of dating was really long gone,” Cronin told The Washington Post.

For students worried about rejection, Cronin says, acceptance of rejection is “a great skill to build, so that you can have a thicker skin.”

Additionally, fewer 20-somethings are married today than in the past. According to the Pew Research Center, in 1960, 68 percent of them were married, but by 2008, just 26 percent were.

With the decline in marriage rates and the rising average age of people getting married, fewer of Cronin’s students have been on dates than in the past.

One reason for this decline is that students have prioritized finding a job out of college over getting married, owing in part to the excessive student loan debt they rack up.

Cronin says that students’ parents are urging them not to “get caught up in a relationship now.”

“[They] need to get [their] career set and on track before [they] even really start thinking about that,” she says.

Because of today’s “hypersexualized” culture, Cronin adds, students focus more on sex than on “the foibles and the hard work and the joys and the despair of just casual dating.”

She adds, “But everybody’s called to relationships. That’s what it means to be human.”

A new documentary, “The Dating Project,” explores the dating scene for students participating in Cronin’s assignment.