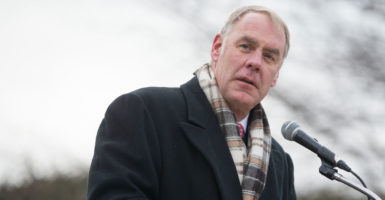 The Daily Signal’s examination of travel records found that on average Zinke’s two predecessors spent more annually on such noncommercial flights, despite media reports critical of Zinke’s spending on travel.

The cost of such chartered flights for Zinke totaled $72,849 in his first six months as interior secretary, the travel records show.

The average annual cost of such flights was $155,515 for predecessors Ken Salazar and Sally Jewell from fiscal years 2010 to 2016, according to records provided by the Interior Department to the House Natural Resources Committee.

Salazar and Jewell spent just over $1 million on chartered flights over the seven years, the records show.

The Interior Department’s Office of Inspector General released a report Monday on Zinke’s use of chartered and military aircraft between March and September 2017, the span of fiscal year 2017 when he was interior secretary.

The report came in response to “several allegations of travel-related waste,” the office explains.

For several months, Politico and other national news outlets have focused on Zinke’s flights on chartered and military aircraft in reports that suggested he was wasting taxpayer money on the flights.

In reality, in spending $72,849 on the six trips on noncommercial flights, Zinke substantially reduced such taxpayer costs during his first six months in office, according to the secretarial travel records provided Oct. 31 by Interior to the Natural Resources Committee.

In fiscal 2014, Jewell took seven trips on noncommercial flights at a cost of $145,804, her highest annual total.

The Daily Signal did not examine Zinke’s use of commercial flights to travel, or possible other arrangements with fellow Trump administration officials.

Zinke, a former Navy SEAL and Montana congressman, took over Interior a little over a year ago, on March 1, 2017.

Although the inspector general’s report released Monday largely exonerates Zinke from the allegations of waste, it does criticize one of his chartered flights:

We determined that Zinke’s use of chartered flights in fiscal year (FY) 2017 generally followed relevant law, policy, rules, and regulations, and that two of the three chartered flights he took that year appeared reasonable and related to DOI [Interior Department] business. We found, however, that a $12,375 chartered flight he took in June 2017 after speaking at the developmental camp for the Golden Knights, a professional hockey team based in Las Vegas, NV, could have been avoided.

The Interior Department doesn’t have a permanent inspector general, who must be confirmed by the Senate. Trump has not nominated anyone to fill the position.

Swift, the Interior spokeswoman, told The Daily Signal in an email Wednesday that the inspector general’s report confirms that Zinke followed the law and department guidelines:

This report said exactly what was known all along. The use of chartered aircraft ‘followed relevant law, policy, rules, and regulations. The uses and purposes of the flights also appeared reasonable for official DOI business.’

Additionally, the report shows that in every instance reviewed, the secretary’s staff consulted with and sought prior approval from the career ethics officials and travel lawyers, and that we follow their expert advice.

“Specifically, I am concerned that glib suggestions that the department paid $12,000 to accommodate a 12-minute speech do not fully account for the facts and circumstances surrounding that trip,” Bernhardt says in the memo to Kendall, adding:

Reading through your report I was surprised to see that it only focused on the advanced planning for the secretary’s Nevada trip, and did not address the actual on-the-ground execution. While this examination of the process is valuable, it is only a portion of the factual picture.

For example, your report never mentions that the secretary stopped to inspect Red Rock Canyon National Conservation Area and visit with department employees after meeting with local leaders and announcing Payment in Lieu of Taxes grants in Pahrump, Nevada and before attending the Golden Knights event in Las Vegas. This is a significant omission.

When the secretary’s visit to Red Rock Canyon is added to the timeline, it is dubious whether the secretary would have been able to get to the airport in Las Vegas in time to catch the last commercial flight to meet with the Western Governors Association (WGA), even if the stop with the Golden Knights were scrapped.

The inspector general’s “failure to consider these on-the-ground realities is a glaring omission,” Bernhardt writes in the memo to Kendall.

“No, we conduct investigations into a wide range of allegations regarding fraud, waste, and mismanagement,” Nancy K. DiPaolo, director of external affairs for the office, responded Wednesday in an email. “We did not receive nor investigate allegations of misuse of chartered aircraft by the former Secretary of the Interior or political leadership of the previous administration.”

The Daily Signal also asked whether Kendall had a response to Bernhardt’s underlining the “glaring omission” of facts in the report’s criticism of one of Zinke’s chartered flights.

“We appreciate the careful review of our investigative work and prompt attention to matters requiring attention,” DiPaolo said. “We meet regularly with recipients of our reports to address any questions and to solicit feedback. We appreciate the Deputy Secretary engaging in such discussions.”

The Daily Signal’s initial review of air travel records for the Obama Interior Department in fiscal 2013, 2014, and 2015 found that many are vague about actual costs.

The records for these years identify individual Interior Department officials, where they traveled, and the costs of premium and coach fares.

However, the records don’t indicate which fare the traveling officials selected. Nor do they specify Jewell or Salazar and their costs.