Here’s the Path Forward for Health Reform in 2018 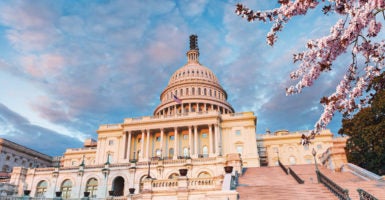 Rather than paying insurance companies, the federal government ought to give block grants to states to help steward the return of freedom and personal choice over health decisions. (Photo: sborisov/Getty Images)

An open letter to the American public from over 35 conservative leaders, whose names  are listed at the end.

Congressional leaders were poised last month to spend tens of billions of dollars in the omnibus bill to temporarily shore up Obamacare’s failing health insurance system.

That money, however, never would have given Americans the long-term relief they so desperately need.

After this idea was struck from the spending bill, Sen. Lamar Alexander, R-Tenn., who had worked closely with Sen. Susan Collins, R-Maine, to shape a bipartisan deal, said that “the only choice we have is to go back to repeal and replace the Affordable Care Act.”

We agree. Obamacare is broken and cannot be fixed, and there is a better way forward.

The True Cost of Obamacare

Obamacare has nearly destroyed the private market for individual health insurance. Young people find it increasingly difficult to find entry-level jobs because the employer mandate makes it so expensive for companies to hire them. Lower-income Americans find themselves stuck with Medicaid rather than having a choice of a better plan.

The No. 1 issue voters want their elected representatives to address this year is the high cost of health coverage.

We, along with many colleagues and allies in the conservative community, are working to chart a new path to empower consumers and return authority to the states to provide people better and more affordable health coverage options.

Our plan targets the two main problems under Obamacare: Costs went up, and choices went down.

To fix these problems, we lay out three big goals to: 1) lower costs and improve patient choices, 2) give states flexibility and resources to achieve these goals, and 3) set federal guardrails so people can choose private coverage if they don’t like the options their state provides.

Our plan recognizes that what works in Massachusetts will not work in Mississippi or Missouri or Montana. What works in big cities will not work in rural areas. In response, we would provide states with greater flexibility and new resources to serve as stewards in returning freedom and choice over health decisions to patients.

Dollars would flow not to insurance companies, but to the states through block grants that would replace Obamacare’s payments to insurers. With new flexibility, states could use the money to:

Our plan would also support patient choice with improved health savings accounts. Taxpayers would be better protected because federal spending would be placed on a predictable path. And our plan has built-in life protections.

This plan builds on stepping stones laid out by Congress and President Donald Trump.

The Trump administration is doing all it can with its regulatory authority to give people more affordable choices, including allowing small businesses and individually-insured people the ability to join larger insurance pools to get better rates and more flexible benefits. And it is reviving temporary health insurance policies, which will allow millions of Americans a bridge to retaining coverage.

This step-by-step relief is important, but it is not enough. These actions do not repair the fundamental damage that Obamacare is doing to the private insurance market. For that, Congress must act.

Obamacare broke its core promises by increasing costs and reducing choices. The federal government has taken over decisions that should be made by families. Patient choice and competition have been usurped by government control.

There is a brighter path forward. Our plan would serve as a down payment to reverse this damage. It would begin to restore a properly functioning market in the health sector to lower costs through consumer choice and competition—allowing Americans greater ability to choose the doctor, health care, and health plan of their choice.

We believe this path could get majority support in Congress and show the American people that members understand their distress. We are inspired by the willingness of so many to work creatively toward providing this down payment solution to begin addressing Obamacare’s problems.

As former Pennsylvania Sen. Rick Santorum observed, in his 25 years in public life, this is the first time he has seen a major initiative emerge from “the bottom up and the inside out” to refine a policy proposal and build broad coalition support.

Congressional Republicans are right to worry about Obamacare’s problems. They would be wise to consider this plan as the true solution to the problems facing America under Obamacare.